This CARHA Hockey league in Quebec does fantastic work for charity every year. We had the opportunity to speak with Joe from the Sleeman's Hockey League to discuss the work they do and why they do it.

The Sleeman’s Hockey League in Aylmer, Quebec held the 4th annual men’s 50+ recreational hockey tournament on May 4th and 5th, 2019, at the Frank Robinson Arena in support of the local Aylmer Food Centre.

The tournament consists of four teams and all participants are former members of the Aylmer 30+ Hockey League. It continues to be organized and staffed entirely by volunteers. The spouses of some of the players known as the “Chilli Chicks” prepared and donated all the chilli and pulled pork served during the tournament.  All the proceeds were donated the Food Centre.

We raised $2,700 in cash donations and 240Kilos (500Ibs) of non-perishable food items for the Aylmer Food Centre.

The Food Centre weighs all the food donated and converts the amount to dollars ($4.00/Kilo) for budgetary purposes. The dollar value for the food donated came to $960. The overall donation was $3,660.

In four years, this small tournament has donated $9,200 and over 1,000 pounds of food to the Aylmer Food Centre!

How does it feel to receive such fantastic support from your players?

It’s great to have fantastic support from the players, volunteers and local businesses to make the tournament a great success every year.

It’s all about giving back to the local community to the best of our ability.

It’s a big part of our culture both on and off the ice.

Playing for hours at the local outdoor rink after school and weekends.

Seen below is a picture with the cheque presented to the Director of Aylmer Food Centre, Mr. Gérard Emond (far left) and staff by our tournament President Charles Ethier (second from the right). 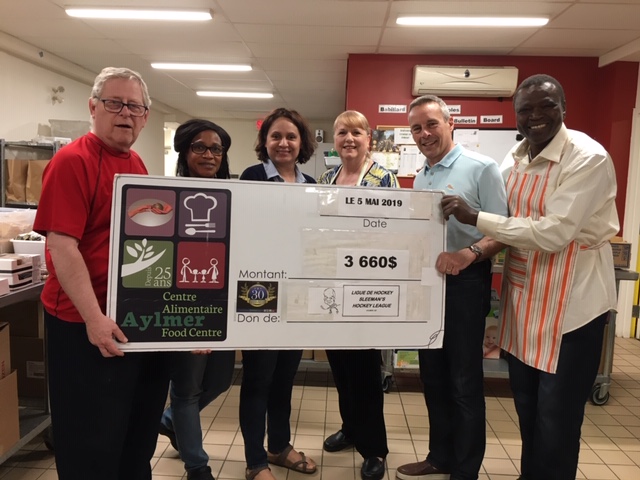