In our news story from last Thursday, September 19th titled "Inspiring Young Girls", we mentioned an all-new initiative in women's hockey as a key piece of movement in the right direction - the Dream Gap Tour.

We wanted to provide more information as to just what the Dream Gap Tour is as we also plan on covering the Tour on the CARHA Women's Hockey Facebook and Twitter pages so we can do our part to #GrowTheGame.

Below is an excerpt from a recent Globe and Mail piece explaining more about the tour!

"So these holdouts gathered in groups at various rinks across the continent this week – such as the one in Mississauga – and laced up their skates to prepare for something else.

They have formed the Professional Women’s Hockey Players’ Association and they will take their hockey to audiences in different ways. In lieu of playing in a league, the women will compete against one another in a series of showcase events in multiple North American cities. Regardless of which country or city she has represented before, each woman will wear the same PWHPA logo on her jersey.

They are calling it the Dream Gap Tour, and its first event is a four-game exhibition tournament in Toronto this weekend. The tour aims to highlight the gap between what boys and girls can aspire to achieve as professional hockey players. It provides the women opportunities to compete this year, puts their struggle before the public and keeps women’s hockey from vanishing from the public eye until the next Olympics or world championship.

The players describe this as “a season of action” and “a bridge year.” They are seeking the advice of Billie Jean King and the women who pioneered pay equity in pro tennis four decades ago. Where this bridge actually leads remains foggy, especially because there are still pro players outside this galvanized group, getting ready to suit up in the U.S.-based National Women’s Hockey League.

So will these female hockey players sit out from league play for just a single season, or could it be longer? What exactly do they want to achieve this year?

“If it was just me coming out and demanding a better pro league, no one would listen to one person. But when we all stand together and share our collective goal, that is really powerful,” Spooner said. “Hopefully we have lots of young girls out watching the tour, seeing that even though we don’t have the CWHL any more, we’re fighting for a pro league that they can play in when they’re older. It’s a scary time for women’s hockey, but it’s also a really exciting time.”

The first stop on the tour this past weekend received a tremendous response, with many young girls showing up to cheer on the stars and passionate women that they look up to.

We strongly believe these are just the types of initiatives required to push the women's game in the right direction, and we're glad to see these women showing no signs of giving up on their fight to #GrowTheGame. 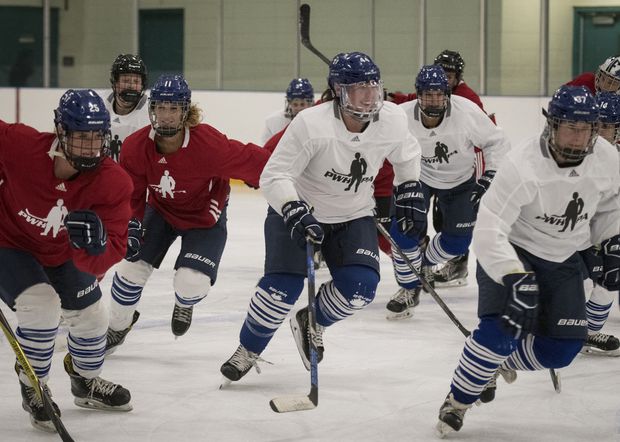