Ah, it’s finally here. The National Hockey League (NHL) resumes and playoffs are in plans to start. It may just end up being worth the wait as there’s not much that sounds better than sitting in the pool with a refreshment, with some burgers on the grill and watching some intense playoff hockey on TV.

For us adult leaguers, the news of this new playoff format is definitely confusing. So we thought we’d break it down and put it in layman’s terms. Here’s a brief overview of what you can expect this coming August? September? IOctober? Well, whenever they start games up again.

For simplicity here’s a diagram of how the first rounds would look. 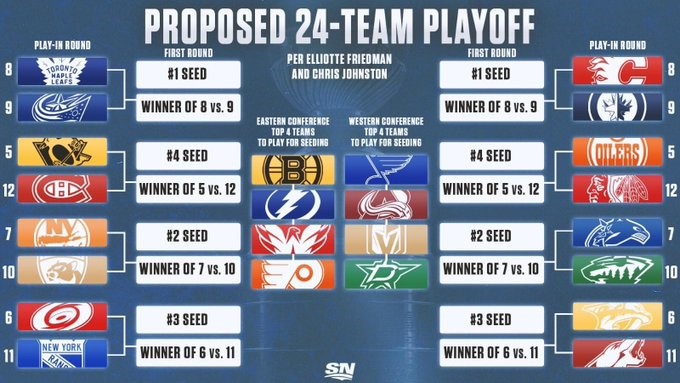 The winners of these match-ups would advance to the official first round of the playoffs, and the series would continue like any other year of the Stanley Cup Playoffs.

This playoff format is in no way perfect, however based on the fact we couldn’t see how the remaining games would have played out, it seems half decent. Let us know what you think, and how would you have structured it differently?