Most NHL fans have the same nightly ritual, which includes eagerly turning on the sports channel before bedtime and being richly entertained by watching highlights of the top 10 goals scored from that night’s action from around the league.

One of the many exciting hockey elements that get the fan’s adrenaline pumping is watching and cheering as they witness fast-paced highly skilled goals, which they can talk about with friends, family or work colleagues the next day.

Throughout the National Hockey League’s rich history, there have been thousands of historical highlight-reel goals scored from Hall of Fame legends like Bobby Orr, Mario Lemieux, Steve Yzerman, Dennis Savard and Pavel Bure to name just a few.

Naturally, it’s only human nature that most hockey fans would come up with different lists of their top five NHL highlight-reel goals of all time. Pittsburgh Penguins fans would probably have Lemieux on the list for one of his many highlight-reel goals, notably, the solid first impression he made on October 11, 1984, by scoring on the very first shot of his first-ever shift. On that historical opening shift, Lemieux made a statement when he batted a loose puck past Boston Bruins defenseman Ray Bourque at the Bruins blue line before streaking in on a breakaway and scoring on a nifty deke against Bruins goalie Pete Peters.

Detroit Red Wings fans would probably have Yzerman on their top five list as he also scored his fair share of highlight-reel goals in his Hall of Fame career. On May 16, 1996, he sent the Joe Louis Arena fans into a frenzy after his double overtime series-winning goal in Game 7 of the Western Conference semifinals the St. Louis Blues. Displaying his speed, Yzerman skated down the ice and unleashed a hard and accurate 60-foot slap shot which whistled past Blues goalie Jon Casey to propel the Wings into the next round.

Beloved Chicago Blackhawks fans would more than likely include the shifty Hall of Famer Dennis Savard, who scored his fair share of highlight goals at old Chicago Stadium, or another slick stickhandler, Patrick Kane, who no matter what he does for the remainder of his Blackhawks career will always be remembered in Chicago for scoring the 2010 Stanley Cup winning goal.

The beautiful thing about narrowing a list like this to the top five highlight goals of all time is that it leaves room for debate which is what passionate NHL fans like to do. 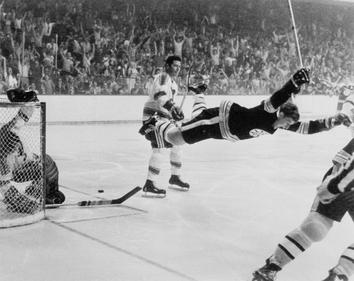 Bruins fans, I’m sure, would agree that sitting number one on the list for the best highlight goal of all time belongs to former Boston defenceman Bobby Orr who, during his prime in the late 1960s to mid-1970s, routinely rocked the Boston Garden with his signature end-to-end rushes.

However, when Bruins fans think of this Hockey Hall of Famer, more than likely they think back to his signature Stanley Cup winning Game 4 overtime goal scored against St. Louis Blues goalie Glenn Hall. Capturing the moment in a timeless iconic photo was photographer Ray Lussier who snapped a picture of a smiling airborne Orr with his hands out in celebration seconds after scoring that Stanley Cup winning goal. This goal was scored when Orr in the slot took a pass from his teammate Derek Sanderson from behind the net before scoring past Hull to complete the four-game sweep. The iconic photo of an excited airborne Orr is proudly on display at the TD Garden.

In commemorating the Bruins' most important goal in franchise history, a bronze statue of Orr famously flying in the air with his arms stretched and a smile on his face after scoring the Stanley Cup winning goal was officially unveiled on May 10, 2010, outside of TD Garden.

Grabbing the number two spot for all-time best NHL highlight-reel goal is 19-year-old Carolina Hurricanes talented forward Andrei Svechnikov. He has perfected a lacrosse style goal not once but twice in the early part of his career.

Hockey fans took notice back on March 24, 1996, when during NCAA tournament action, Michigan Wolverines player Mike Legg grabbed headlines with an unbelievable lacrosse style goal from behind the University of Minnesota's net.In what is hands down, the most famous goal scored in college hockey Legg, in a move that kids and NHLers still practiced to this day, scooped the puck up from behind Minnesota's net and, in one motion, stuffed it into the net top corner. This goal didn't go unrecognized as Legg was credited with "Goal of the Year" by Inside Hockey. Fans were also able to see the stick he used, which was sent to the Hockey Hall of Fame in Toronto. Watch 'The Michigan first performed.'

Svechnikov, selected by the Hurricanes second overall in the 2018 draft, scored the lacrosse style goal a 6-3 win against the Winnipeg Jets and goaltender Connor Hellebuyck in December 2019.

This goal, which gave Carolina a 3-2 lead, occurred when Svechnikov had the puck on his blade and skated around the Winnipeg net before tucking it home over Hellebuyck’s right shoulder.

Amazingly, Svechnikov scored a similar lacrosse style goal a few months earlier in October when he successfully pulled it off against the Calgary Flames netminder David Rittich.

Occupying number three on the all-time greatest highlight reel NHL goal list is 2004 first overall pick, Washington Capitals power forward Alex Ovechkin. In what has been a first-ballot Hall of Fame career, Ovechkin, who is still playing, has as of early March tallied 713 goals along with 1,295 points in 1,171 games.

Ovechkin, who is affectionately known as the Great 8, made history on Saturday, February 20, when he became only the eighth NHLer to reach the 700-goal mark in a game against the New Jersey Devils. Starting around that time, hockey fans have been debating about whether the 35-year-old greybeard can catch Wayne Gretzky, the all-time NHL leader with 894 goals.

On January 16, 2006, against the Phoenix Coyotes, Ovechkin scored what has been termed 'The Goal,' which years later is still talked about and landed the Great 8 the third spot on the list.

During a 6-1 lead against the Phoenix Coyotes, Ovechkin at 11:54 of the third scored an unbelievable highlight goal for the ages. Skating with the puck, Ovechkin used his blinding speed to get around Phoenix defenceman Paul Mara, who knocked the Capitals rookie onto his backside. Showing no quit, Ovechkin pulled off what he later termed his favourite goal when he somehow reached out with his stick and hooked the loose puck before, still on his backside, scoring against a prone and stunned Coyotes goaltender.

Being a Pittsburgh Penguins fan, I had to put the 1984 first overall pick, Mario Lemieux, on the list. In a career that saw this Hockey Hall of Famer win two Stanley Cups and score 1,723 career points, Lemieux, as mentioned earlier, scored his fair share of highly skilled awe-inspiring goals.

Another of those goals came on May 17, 1991, during the 1991 Stanley Cup finals when in Game 2 action at the Civic Arena in Pittsburgh, the 6 foot 3, 230-pound Lemieux thrilled Penguins fans by scoring a goal for the ages during a 4-1 win against the Minnesota North Stars. This signature highlight goal, which fans today are still talking about, took place during second period action, with Pittsburgh holding onto a 2-1 lead at what was a raucous Civic Arena.

Showcasing his skills, in a play etched in Penguins history, Lemieux amazed fans with his elite skills. Speeding down the ice he didn’t even break stride as he corralled a pass from teammate Phil Bourque and found himself at the Minnesota blueline when he showed his magic. Skating at full speed past the neutral zone, Lemieux deked out and split the Minnesota North Stars defenceman where suddenly he found himself inside the North Stars blue line fast approaching goaltender Jon Casey. Once again showing his goal-scoring touch, Casey tried for the poke-check but missed as Lemieux wowed the crowd and hockey fans watching from coast-to-coast by stickhandling past the poke-check before eventually scoring on a backhand while falling into the prone North Stars goalie. Following the goal, an excited Lemieux got up and enthusiastically pumped his fist as legendary broadcaster Bob Cole exclaimed, “Oh baby.”

Hockey fans know about the accomplishments of Hockey Hall of Famer and former Montreal Canadiens great Maurice “Rocket” Richard, who terrorized NHL goalies with his shot and scoring prowess over his 18-year career. From 1942-1960, Richard played 978 regular season games while scoring 544 goals and 966 total points.

Richard, who spent his entire career in Montreal, went on to win eight Stanley Cups. The “Rocket” earned a spot on my list for his 1952 Semi-Finals Game 7 heroics against the Boston Bruins.

The scene was April 8, 1952, at the Montreal Forum. With the score knotted at 1-1, Richard, who was seriously injured earlier in the game courtesy of a hit from Bruins Leo Labine, came back from the Forum infirmary and ended up scoring the winning goal. Bleeding and dazed from a stick to the head, Richard went against doctor’s orders by coming back to play in the third period.

With under five minutes left in regulation, Richard, who had to have six stitches, made history after taking a pass from defenceman Butch Bouchard and started skating up ice with that familiar determination. Using his strength, Richard skated towards the Bruins goal while pushing off Bruins defenceman Bill Quackenbush. He would score the series-winning goal on Boston goalie “Sugar” Jim Henry.

Moments following the series, there was a famous photograph taken of Henry, who had two black eyes after being shaken up in Game 6 of the series shaking hands with Richard.

“I felt bad of course because he had just eliminated us from the playoffs but I had to congratulate the Rocket because it was one of the greatest goals I had ever seen and it was no shame being beat by such a player,” Henry said years later. “Rocket Richard filled the stadiums wherever he went in those days with the fans coming out to either boo or cheer him.”

Remember, prior to coming back in the third, Richard was in and out of consciousness after being hit in the head and stomach as a result of a violent bodycheck. Richard coming back and scoring the winning goal shows what sacrifices players will go through for that opportunity to get their names on the Stanley Cup.

Naturally, there have been hundreds of other NHL highlight-reel goals, which some would argue are top five worthy. But, as already mentioned, the fun thing about hockey and sports is passionately debating one’s opinion on such matters.