Serena Williams and the Strength of Sports
Friday, April 16, 2021

This article is part of our series to support Sport Information Resource Centre (SIRC)'s Moms Got Game campaign. Learn more about how to participate in this great initiative. Share your story for a chance to win great #MomsGotGame prizes.

In 2017, Serena and husband Alexis Ohanian welcomed Olympia. From the start, mother and daughter shared a special bond. Serena won her 23rd Grand Slam singles title at the Australian Open while eight weeks pregnant, joining a growing list of athletes who have competed while pregnant. Becoming a mom used to mean the end of one’s athletic career, but women no longer need to feel they have to choose. It wasn’t going to stop the 35-year-old tennis star from continuing her pursuit of record-tying number 24 (she currently holds the record for most Grand Slam singles titles in the modern Open Era and is trying to match Margaret Court’s career total).

“I think sometimes women limit themselves,” Serena said in an interview with Vogue. “I’m not sure why we think that way, but I know that we’re sometimes taught to not dream as big as men, not to believe we can be a president or a CEO, when in the same household, a male child is told he can be anything he wants. I’m so glad I had a daughter. I want to teach her that there are no limits.”

The possibilities are endless. Olympia is no stranger to the tennis world, a familiar face at practices and tournaments, but there’s been no pressure to get a tennis racket in her hands. The three-year-old enjoys hitting the court with her mom as a safe activity during the pandemic, but they’re keeping options open. With her first business investment, she's now a co-owner of the new National Women’s Soccer League team launching in Los Angeles. The big move is credited to her father who personally invested on behalf of the family, motivated by the importance that creating more opportunities for women in sports has on him and his wife and for their daughter’s future.

One thing is for certain, sports will play a significant role in Olympia’s life. In a powerful video for Gatorade, Serena’s advice for her newborn daughter is a message to all girls. There are many lessons to be learned through sport, relationships to be built, and highs and lows to experience. It provides skills to succeed on and off the field. So no matter what game she chooses, it’s important to keep playing.

Olympia may not yet understand the impact her mom’s legacy could have on her, but she’s being raised to be a strong individual. Just look at her name, which Serena reveals, “I felt that what is a name that means strong because this baby is strong, and so I literally looked up synonyms of strong and for names and Olympia stuck out and I wanted her to know that going forward her name is strength.”

Name aside, she has one of the greatest examples right in front of her - a role model who has constantly projected strength and empowerment. Along with her sister Venus, Serena has broken barriers in tennis and continues to fight for equity and equality.

Serena has inspired generations of female athletes, women of colour, and more recently, that group has grown to include new mothers. She credits moms as her new heroes. Balancing a career and motherhood has not been easy, but she pulls strength from the other moms she sees.

“Being a mom is super important, but also being a leader so my daughter can look at me and say, ‘This is what my mom did,” Serena shared in an intimate conversation with Anna Wintour (editor-in-chief of Vogue) during the 2020 New York Fashion Week. “I aspire to do that and I want to be better… it’s really important to me to inspire the next generation because that’s what the future is.” 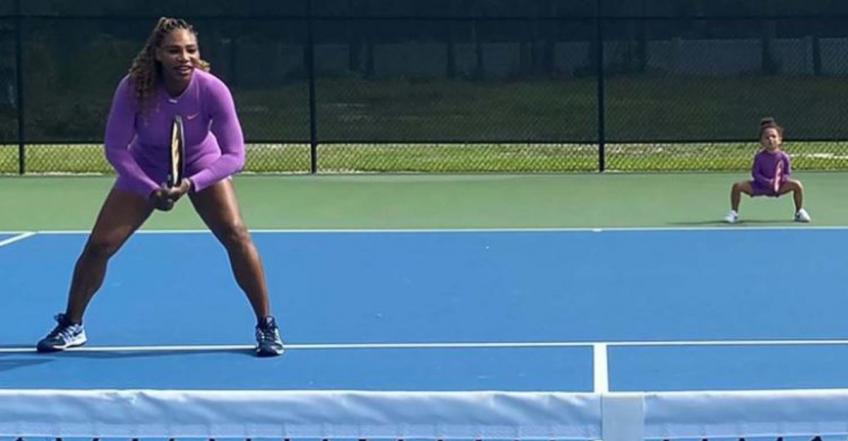