The idea for the Outdoor Hockey Club started as a way to stay healthy, active and challenge yourself. Randy Frykas, a freelance documentary filmmaker out of Winnipeg, Manitoba, wanted to find more ways to incorporate hockey into his busy life. The pandemic forced things to slow down, and the importance of staying active became quickly apparent to Frykas. While unable to play hockey games, he could still go outside with a stick and a puck, bringing it back to the simplest form.

In late 2019, early 2020, Frykas started developing his own projects. After nearly 20 years in the business, he wanted to focus on projects that interested him or wanted to learn more about. He reached out to stickhandling specialist Pavel Barber about making a movie, and soon found himself travelling between Vancouver and Toronto to film a documentary short. Around the time of the film’s completion, the country went into its first lockdown of 2020.

“It was during that time, basically the spring of last year, that I came up with the idea of doing some sort of program that focuses on getting people outside playing hockey. It doesn’t have to be competitive; it can just be going outside for the fun of it, challenging yourself, maybe having a friend or two with you.”

Frykas started thinking back to his hockey memories as a kid growing up in Stonewall, Manitoba. A typical Canadian story, he began skating young, at the age of four, and played organized hockey from the age of seven to 18, from peewee to bantam to high school.

“Thought while I’ve had some great times and met some great people during those experiences, some of my favourite times were on the outdoor rink, whether it was just by myself or with a couple friends.”

And so, the idea was born.

Enjoying the simplicity of the game

For Frykas, outdoor hockey represents the purest form of the sport. He incorporated that sentiment into the name and soon began promoting this Club to ‘encourage people of all ages, backgrounds and skill levels to head outside to play hockey as a way to stay active and healthy.’ It wasn't about competing against others but rather challenging oneself, improving skills, and developing new ones.

“I tried to work this into my message a little bit, but even if you don’t have ice, there are still things you can do, whether it’s with a hockey ball or shooting a tennis ball against the fence. I’ve just been developing this thing as I go, and I’m still trying to figure out what it’s going to be, but at the same time, I’m just letting it become whatever it’s going to be naturally, pun intended, I’m just kind of following the puck. I had certain plans for things, and some pan out and some don’t.”

Frykas collaborated with a local artist in Winnipeg, Allan Lorde, to develop the logo. His fondness for nostalgic sports logos inspired the look, taking on a Baltimore Orioles feel. The owl comes from his own hockey experience, the beer league he played in in his early 30s. The team’s choice of the animal paid tribute to an album cover from the band Rush. After each game, they would present an owl to the player of the game. The Outdoor Hockey Club owl’s style was influenced by Bert of the popular Canadian tv show, the Racoons, who was always wearing a hockey jersey.

When COVID cases were lower last spring and summer, Frykas started reaching out to various hockey brands and equipment companies about putting together a series of outdoor hockey events for winter 2020. As cases increased, the idea was sidelined. Switching efforts, focus turned to building awareness for the project.

“Everyone loves hockey pucks, and if you’re outside playing, you can never have enough pucks.”

With that in mind, Frykas created hockey pucks with his logo, distributing them to people he knew or leaving them around. It was his way of connecting with people, and soon more requests were coming in on social media about the puck drops. People were asking where to get the pucks, and Fryaks began shipping them throughout Canada and the United States. In February, he went on a road trip he calls the ‘Southwestern Manitoba Puck Drop,’ passing through six or eight different towns and dropping off pucks to anyone who inquired on social media. By the beginning of spring, over 825 pucks had been distributed in Canada and the United States.

Playing on his skills as a filmmaker, Frykas started creating his own content with his GoPro and other camera gear as a form of storytelling. This took most of the winter and was an excuse to get to the rink for a few hours when the sun came up before work.

“Very relaxed hockey moments and things that I was doing outdoors here, things that you could do for fun. You don’t have to like take it so seriously. Just get outside and get fresh air and have a blast kind of thing.” 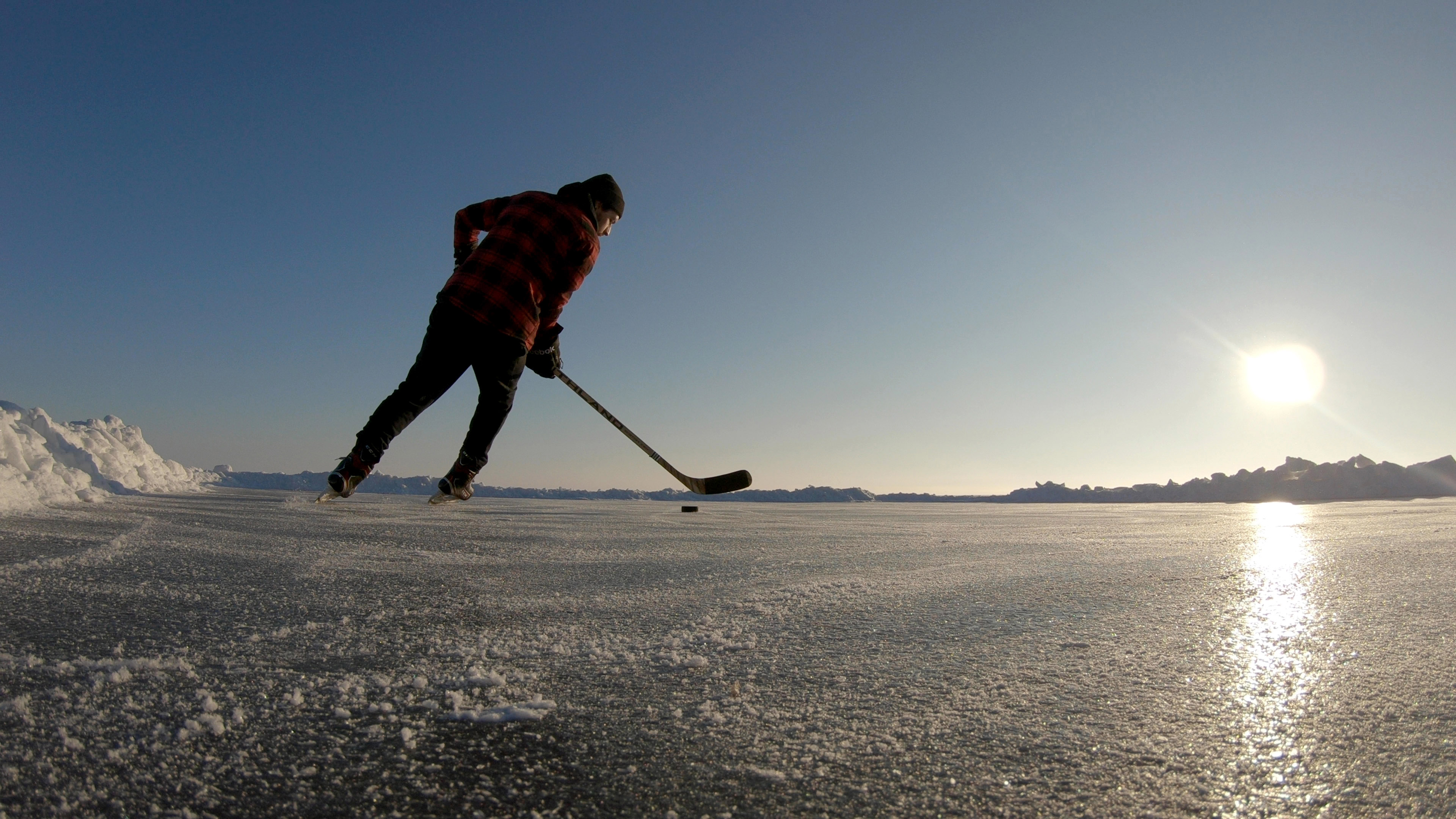 His love of filmmaking matches his love for hockey, and Frykas works on combining those two passions as much as possible. The ultimate goal is to highlight stories about outdoor hockey and the people associated with it. His background in filmmaking and fondness for storytelling has helped him meet people over the years and understand the importance of connecting with and learning about other people.

“That perspective has given me an open mind, and I’m also conscious to new perspectives but also understand when someone has an interesting story or perspective. I love getting out there. I love meeting people and seeing new people.”

In March, Frykas returned to his hometown of Stonewall, which is an hour north of Winnipeg. Many things he has been doing have been focused on helping the community where he came from. The Stonewall Blues U11 A1 team had seen the videos and reached out to invite Frykas to join them for their first outdoor skate since October. While they were only able to practice a few times, it was a memorable skate for the team.