Inspiration for the Outdoor Hockey Club

Little did Frykas know when he started working with Pavel Barber that Barber would significantly influence him. Barber grew up playing hockey with the same group of kids and loved going to the outdoor rinks before and after school. He’d spend his days at the rink practicing and perfecting pro hockey moves and now has a massive following for the videos he makes teaching others, including NHL players like Jonathan Toews and Charlie Coyle who have reached out for stickhandling programs to help diversify their skills.

“Just because you’re too small or never had a chance growing up, there’s still things you can do to have hockey as part of your life. Whether it’s for fun or as income.”

“The perfect example of someone who took their love for the game and made it a full-time job.”

Love of the outdoors

Frykas is a frequent visitor to outdoor rinks in Winnipeg and recognizes the endless hours community members dedicate to keep the rinks in good shape and open to the public. He speaks fondly of the Wildwood Park Community Centre.

“I love outdoor rinks. And I love community rinks and the history that you see here in Winnipeg. Way back in the day, these rinks would have been where club teams played. They wouldn’t have had many indoor rinks, so I definitely don’t take community rinks for granted. But any opportunity that I have to skate somewhere like completely in nature like on Lake Winnipeg or last winter I was able to skate at Lake Louise, it’s just a whole different experience when you’re actually skating somewhere that was created by nature itself. “

His family has a cottage on Lake Winnipeg, where he spent the past few winters creating a little rink to head out solo or with friends. Mid-late November offers good skating conditions, as well as around Christmas. The snow gets heavier in January, but towards the end of winter, there’s a good melt, then freeze, so the ice is great to skate on.

“It’s an experience that you know you never forget, especially if you’re there first thing in the morning and the sun’s starting to rise of if you’re there at sunset, like those are things you don’t get when you’re skating on an indoor rink. The fresh air, the stars, the sun. If it starts snowing, everything about it is great.”

“Everything just kind of goes away for those moments. Maybe you’ve got a few pucks, and you’re trying to teach yourself how to backhand toe drag or scoop the puck or whatever. Those are the only things that matter in those moments, and you need to make sure you take the time to do things like that.”

When he’s at the rink he gives himself challenges. It’s not about making the NHL or being the best player, but having fun and testing yourself.

“Make Something with Whatever You’re Given”

When asked about challenges working on this project, Frykas had trouble identifying any.

“That’s a tough one. I wouldn’t say there were any challenges because, for the most part, it’s just fun. Like anything I’m doing, I’m having fun doing it. There are different ideas that maybe didn’t do so well. I would have loved doing the same way that I went skating with that under 11 team in Stonewall. I would have loved to do more of that stuff, but just the opportunities weren’t there because of COVID and things being shut down.”

“What I’ve learned from my profession is you make something with whatever you’re given, and then you just keep going, you don’t stop. So basically, whatever showed up, I would do something with that and keep moving forward. My ultimate goal would be like next fall and winter if I could hit the road and meet a whole bunch of people who are making rinks, that are playing outdoor hockey, seeing cool spots.”

His attitude is to ‘take what you have and go with it.’ Thinking back, Frykas says he didn’t expect to be skating anymore in March but got out four more times so. If something he tried didn’t take then another opportunity would come from it. 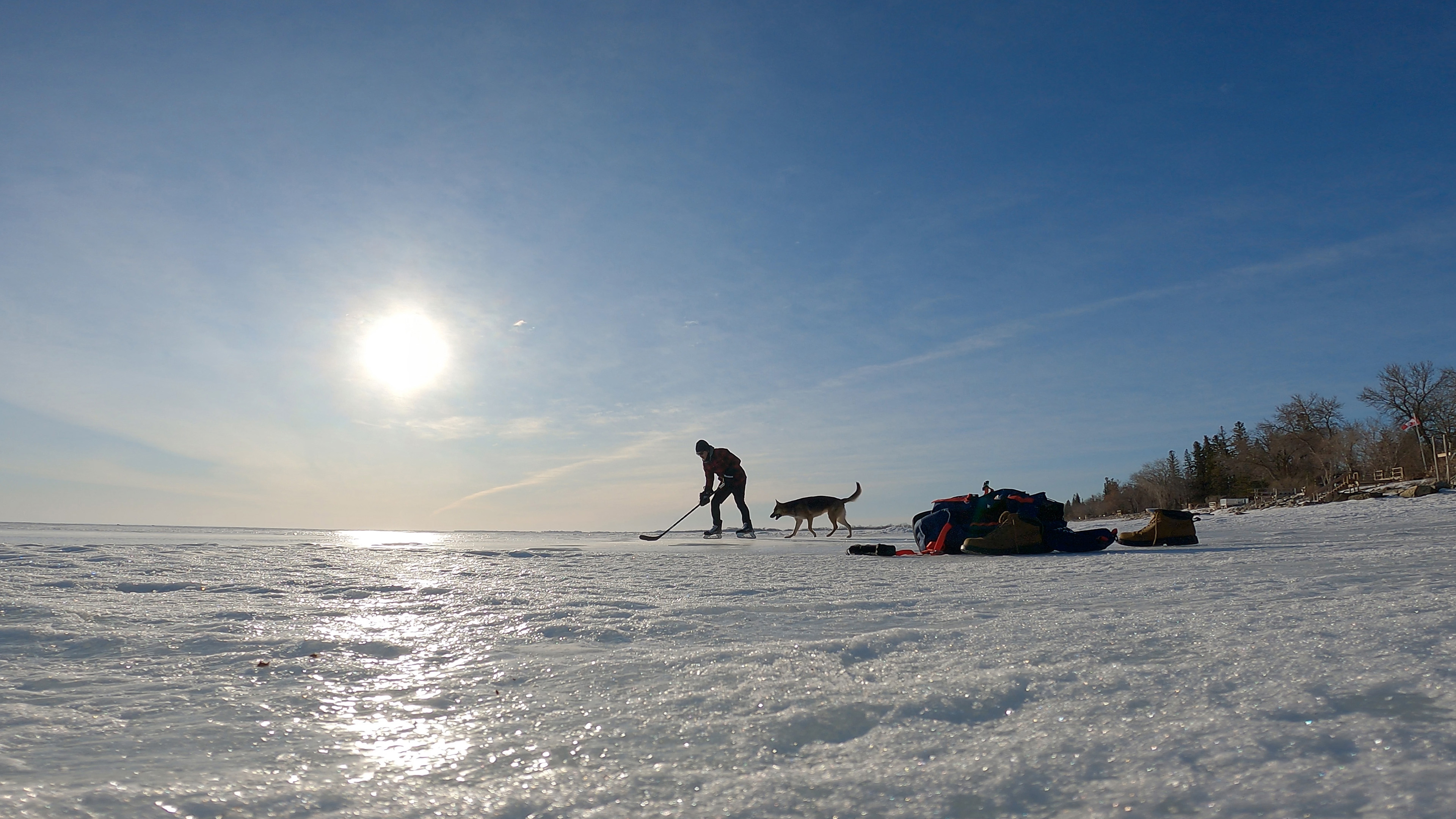 The Future of the Club

The vision for the project is long-term, something Frykas intends to keep working on in addition to his day job.

“I don’t know if you can call this my legacy... If I could eventually turn this into something that’s just ongoing and there’s outdoor hockey clubs all over the place.”

For the spring and summer, he’ll continue distributing pucks and biscuits, encouraging others to get active wherever it’s safe to play. Having some fun with the design, the owl has transitioned to a sunnier hockey version with a tank top, sunglasses and roller blades, making the Outdoor Hockey Club a year-round thing. He feels like he’s a better hockey player than when he was a teenager. For parts of his 20s and 30s, he did very little skating due to work and now is almost halfway through a challenge of completing 100 straight days of playing hockey.

Having fun is what it’s all about. For Frykas, he’s developed a platform to encourage playing for the love of the game, outside where it was meant to be played. His goal is to put together a series on different people and different places; all focused on getting outdoors and staying active.

“The aspect of using hockey as a way of getting outside and staying active over the course of spring and summer and then hopefully I can start planning and making progress on a whole bunch of events and different videos over the course of next winter, I’d like to travel across Canada and focus on different people that are playing hockey outdoors, that are making rinks, that are doing different things with hockey outside and not really for the sake of making the NHL but for the fact that they just love the game. That’s basically why I’m doing it. What can I do more to have more hockey as part of my life and take my skills as a filmmaker and storyteller and combine them.”

“It’s been my way of what can I do to combine the things that I’ve learned over my 20 years of being a professional filmmaker and take those skills and combine them with my hockey skills and my love for the game and see what I can make of it.”

Frykas says if it wasn’t for Mario Lemieux, he’d probably be doing something else. He recalls the 1987 Canada Cup and the memorable Wayne Gretzky to Lemieux play in which his hockey hero scored the winning goal in the last game of the three-game final versus the Soviet Union. Before that, he had some interest but since that moment has wanted to eat, breathe, sleep and play hockey nonstop.

“We only have so much time on this earth so you might as well work hard and dedicate your time to the people you like being around, and the people you love and the thing that you love to do. This is my way of doing it. And also you know spreading a positive message and good vibes… The more people out there that are spreading a positive message and including people and just showing different ways to stay positive and have fun, it’s a benefit to everyone.”