BC Hockey League is Keeping Women in the Game
Wednesday, December 15, 2021

When Sue Rittinger moved back to the Vancouver area in early 2019, she became interested in the 55+ BC Games, which welcomes participants from across British Columbia and features over 30 sports. Each province holds their own games and the winners compete in the Canada 55+ Games.

An avid hockey player for more than 40 years, Rittinger learned her zone didn’t have a team participating. Women's hockey is new to the 55+ Games, having been introduced about two years ago. As the games piqued Rittinger's interest, she came to realize there were many women in a similar position as her, “at an age where they want to have fun and play some good hockey,” she described.

Knowing there were many 45+ and 55+ still playing, and after all, men have specific leagues, why couldn't women? They remained competitive; however, may not be as quick as the younger players and were more cautious of injury. Personally motivated, Rittinger set her sights on developing a new league providing a safe environment for players.

Through local papers, Rittinger got the word out. People saw her story and started calling. When a local rink manager reached out to see how to help, she supported the formation of a new league by offering ice time. While there wasn’t enough interest yet for a 55-plus league, a 45-plus league was achievable.

As Rittinger moved forward, the onset of the pandemic in March of 2020 altered her plans. When the province permitted rinks to allow hockey, public health regulations only allowed for eight players on the ice at a time. While hesitant to proceed during COVID, Rittinger didn’t want to lose the opportunity and ice time she’d gained, so she began the summer with two teams playing 4-on-4 and expanded to six teams in the fall until a shutdown occurred in November.

When arenas re-opened in the summer of 2021, it was a quick turnaround for Rittinger to get play resumed. There was some drop-off, but the league was back in operation with four teams under restricted rules, returning to normal rules in the fall.

“All of this was happening really fast, and I’m trying to figure out what skill level people were and balancing the teams. When you’re starting a league from scratch, it’s a big undertaking.”

For Rittinger, it was important to balance out the skill level per team, which has been one of the most challenging parts for her since starting the league.

“The league is in its development stage. I’m still trying to get people who are mid-average up to a higher level because it’s more fun if people are playing their own calibre. Then as time goes on and I’m getting more names and getting more well known, then the plan would be to have two divisions and could get an upper level, and maybe expand the division I have from four to six teams.”

For now, her focus is on recruitment and putting teams together properly. Two of the four teams contain mostly 55+ women to help prepare for the BC 55+ Games. Over time, she expects to introduce a novice level or less competitive level for beginners or those developing their skills.

“The women are just ecstatic. They are playing where it’s safe, with people their own age, and having a blast, and it’s really satisfying to see how they have a place finally.”

Rittinger is personally engaged and has enjoyed seeing this come to fruition. She enthusiastically shares about hearing from a team of women who have played together competitively for years and who reached out about switching over. The league offers good hockey, the chance to play and have fun. A safe environment is of utmost importance, which Rittinger can monitor in the level of play. In addition, the social aspect is a motivating factor for her. Where she didn’t have this growing up playing on men’s teams, she hopes to foster new friendships for the women in the league. She keeps the teams playing on the same night so they can socialize amongst each other. The arena even has a restaurant, and while it has been closed for the pandemic, offers a location for teams to gather and socialize on game nights once it reopens.

“I just love it. I have a number of injuries from playing competitive sports in my life, so can’t play exactly how I used to, but I find hockey is a sport that you’ve got the skating and it’s a fast game. There’s so many aspects to it - the team aspect, the skating aspect, the playmaking aspect… I’m still hanging on and trying to play until I absolutely can’t. One thing that really motivated me to start the league is where I played in my life, I didn’t have the luxury of playing with people my own age, or had to with the guys, especially in small towns, so I never had that social piece where we’re all the same age and go out socially. We haven’t really experienced that yet because of COVID, but once that’s gone, that will be something that I really wanted and never really had in all my years playing hockey just by the nature of where I played.”

An added benefit is the ability to grow the community of hockey players. Through this, Rittinger can communicate within the league to organize teams for tournaments, like one that is upcoming in Victoria, or to share resources.

To keep the league viable, Rittinger continues to recruit to give more women the opportunity to play. To assist with the formation of teams and securing ice time for the future, anyone interested is encouraged to reach out sooner than later. For more information, contact Sue at laritz99@telus.net. 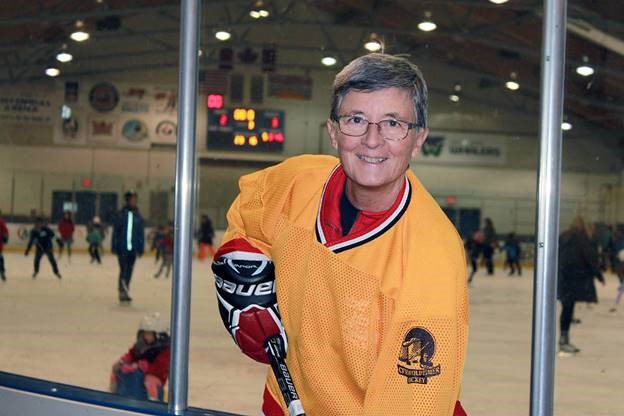