This interview with Margo McDiarmid is part of our 'Keep the Game We Love Going ODR Contest.' Show us how you're enjoying outdoor rinks, wherever you enjoy skating and get your entry featured on our contest submission page. Click here to learn how you could assist your community ODR for next season with $1,000.

Outdoor rinks are iconic to Canadian winters. As the temperature drops, countless memories are made in backyards, parks, and on ponds and lakes. For Margo McDiarmid, Ottawa’s outdoor community rinks proved the perfect subject to photograph. Her deep connection with winter helped inspire a stunning book on these local rinks and the people who use them and maintain them.

McDiarmid, an award-winning journalist and former television and radio reporter with CBC, has had a long interest in photography.

“The thing I like about it, whether it’s video or still, I’m completely absorbed in the moment. You can be in a crowd of people, but it’s you and whatever you’re photographing. I love capturing the emotion of a moment in time in still photography because it can capture so many levels in just one frame, and I love that creative side.” 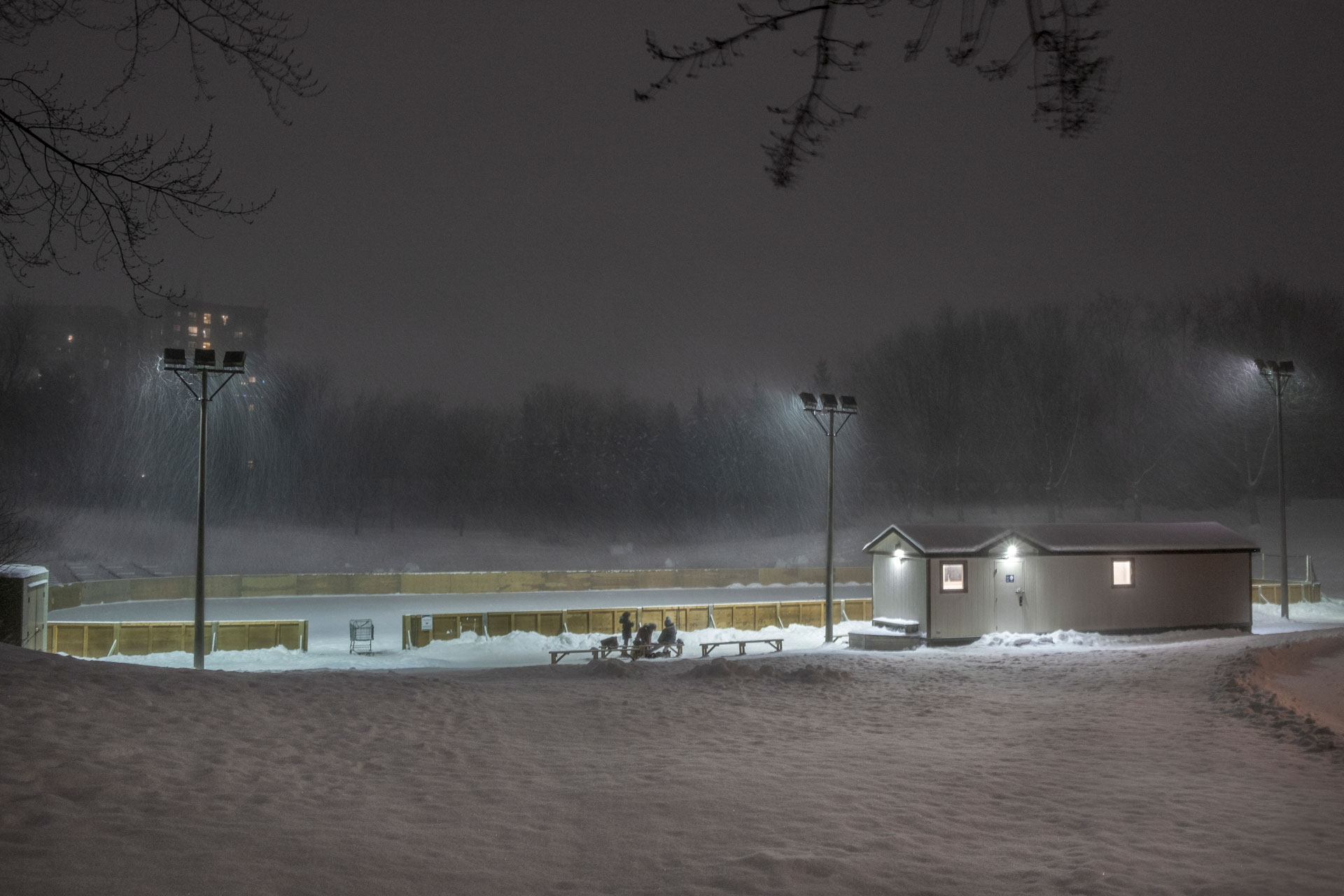 For about ten years, Margo shot documentaries for CBC Television and spent the last 16 years at CBC in the Parliamentary Bureau as an environmental reporter. During this time, she covered stories on many outdoor rinks and the effects of climate change. After leaving CBC, she pursued studies at Ottawa’s School of Photographic Arts (SPAO). The inspiration for the book came from a project she did during the diploma course on the harsh reality of winter in Ottawa.

“One of the photos I took was of Windsor Park, which is a rink right behind my house. I used to walk by every night with my dog, and it was such a beautiful pool of light and happiness in the dark and I would always look at it and think how beautiful it was and what a great photo it would be. So as part of my harsh realities of winter series, I took a photo of the rink. It was the most popular photo of the entire series that I did.”

When Margo took up as an Artist in Residence at SPAO, she developed her initial project into a series on Ottawa rinks and the people who use them and look after them.

“Especially after last year, which was the first full pandemic winter, I thought that rinks were going to be a really important part of everyone’s staying sane during the winter. So that’s why I did the project.” 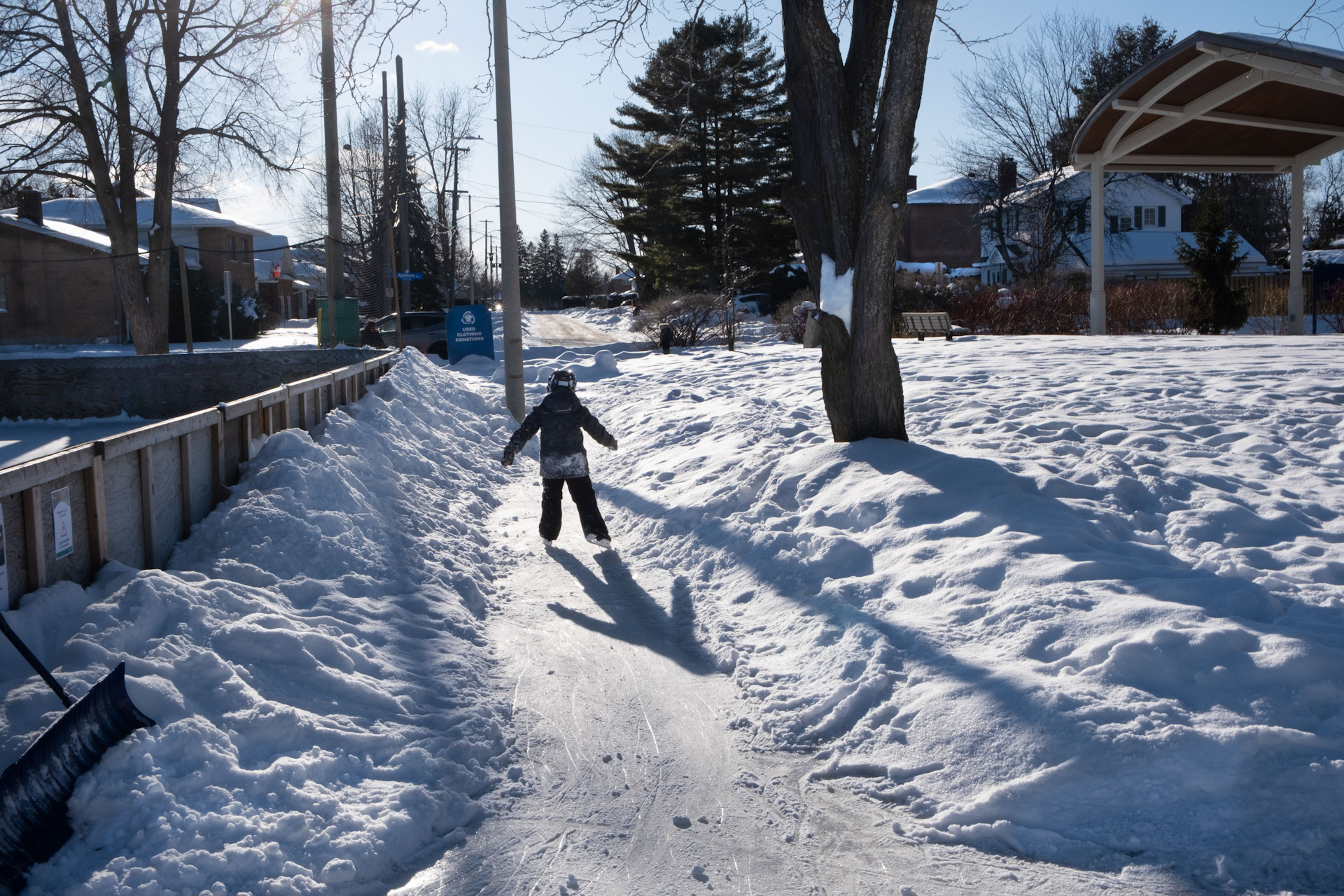 The City of Ottawa is home to 270 outdoor community rinks, each maintained by a hardworking team of volunteers. In a unique arrangement, the City provides the electricity, but the flooding and cleaning are all done by community members. Margo gives a big shout-out to the City of Ottawa and Paul Dupuis, the Head Supervisor of Recreation, whom she reached out to in 2020 to obtain a cross-section of rinks. Not only did Dupuis provide a cross-section of 30 rinks, but he also took an invested interest in the project. The City purchased several books as gifts for the volunteers, a great souvenir that Margo was thrilled could be shared.

Preparations began with visits to 25 of the 30 rinks to survey before the snow fell. Margo was introduced to the people involved in the rinks, including Al Arsenault, whom she refers to as Ottawa’s ‘Rink Guru.’ He knows everything about outdoor rinks, from making the ice to how to properly shovel to ensure the ice doesn’t build up in the corners. There is over 70 hours of work put into a rink before it even opens to the public. Throughout the project, Margo had a chance to get to know some of the people working behind the scenes.

“It really is the volunteers. These rinks would not exist without people who are willing to dedicate nights, almost every night in the middle of the winter, cleaning and maintaining these rinks. It’s hard, they’re hauling around these big hoses and water and big boots.”

“Most of the ones I met were people who came out on a regular basis. It’s good exercise. It’s part of the community. The rinks are so important to their neighbourhood, that’s why they go out and help out. Those rinks are really, in the winter, a central part, where people of all ages can go and clean out the cobwebs of the day. Kids can go and get some exercise, and it’s a safe place for families of all ages.”

What stood out to Margo was seeing how these parks change once the snow falls. 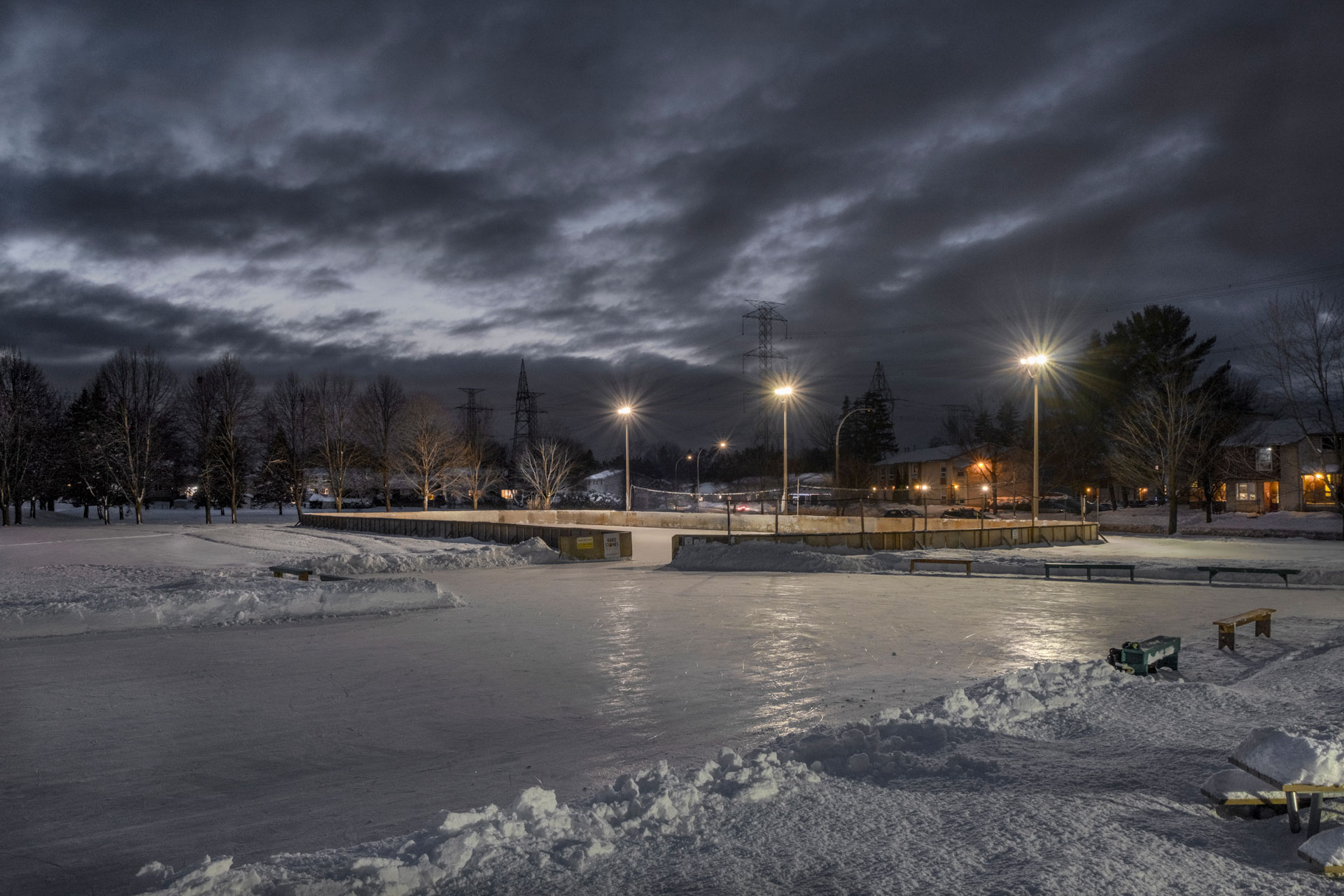 “Each takes on the character of the community, it has its own vibe. Some are really serene and quiet, and some are really busy. Some have a really cool urban vibe. There’s a rink in Lowertown Ottawa, near the Byward Market, called Jules Morin, and it was funded by the Ottawa Senators Hockey Team in a community that’s considered high risk. So they built this beautiful, year-round facility where people can play hockey in the winter and do summer sports in the summer, but it has this amazing ice and people from around Ottawa and Gatineau come there to play hockey because the ice is perfect.”

“The parks take on a completely different character, each rink is different from another. I can safely say we have 270 different rinks in the city.”

Many of the photographs were taken at night. Margo was frequenting rinks three to four times a week between 5 pm and 10 pm and on weekends during the day, braving the cold to capture these moments. 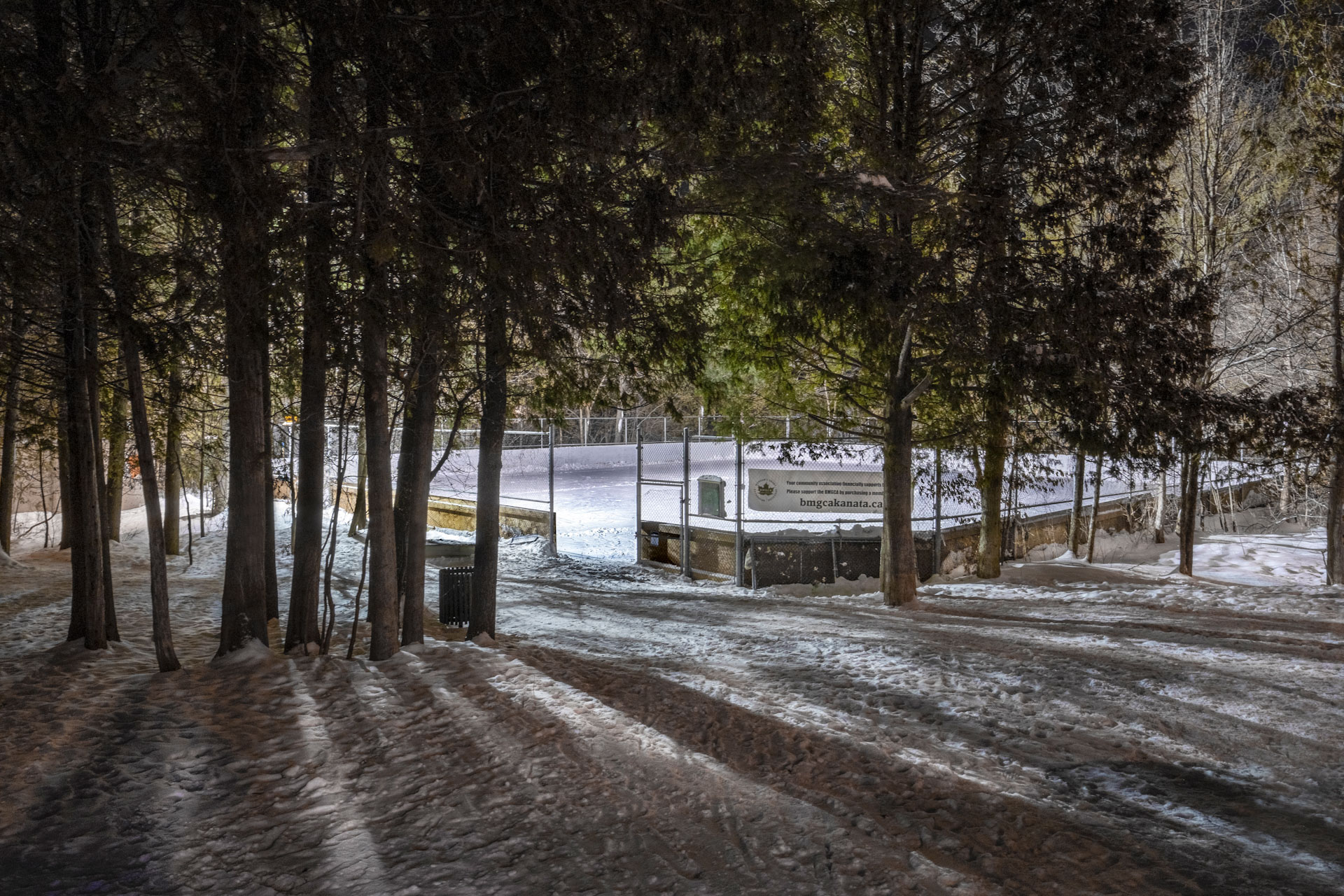 “Some of my most favourite moments of the entire project, which started the end of December 2020, are being out there alone late at night with nobody around, just taking photos of the rinks. And the quiet and the cold and the silence. It’s a very special memory that I have.” 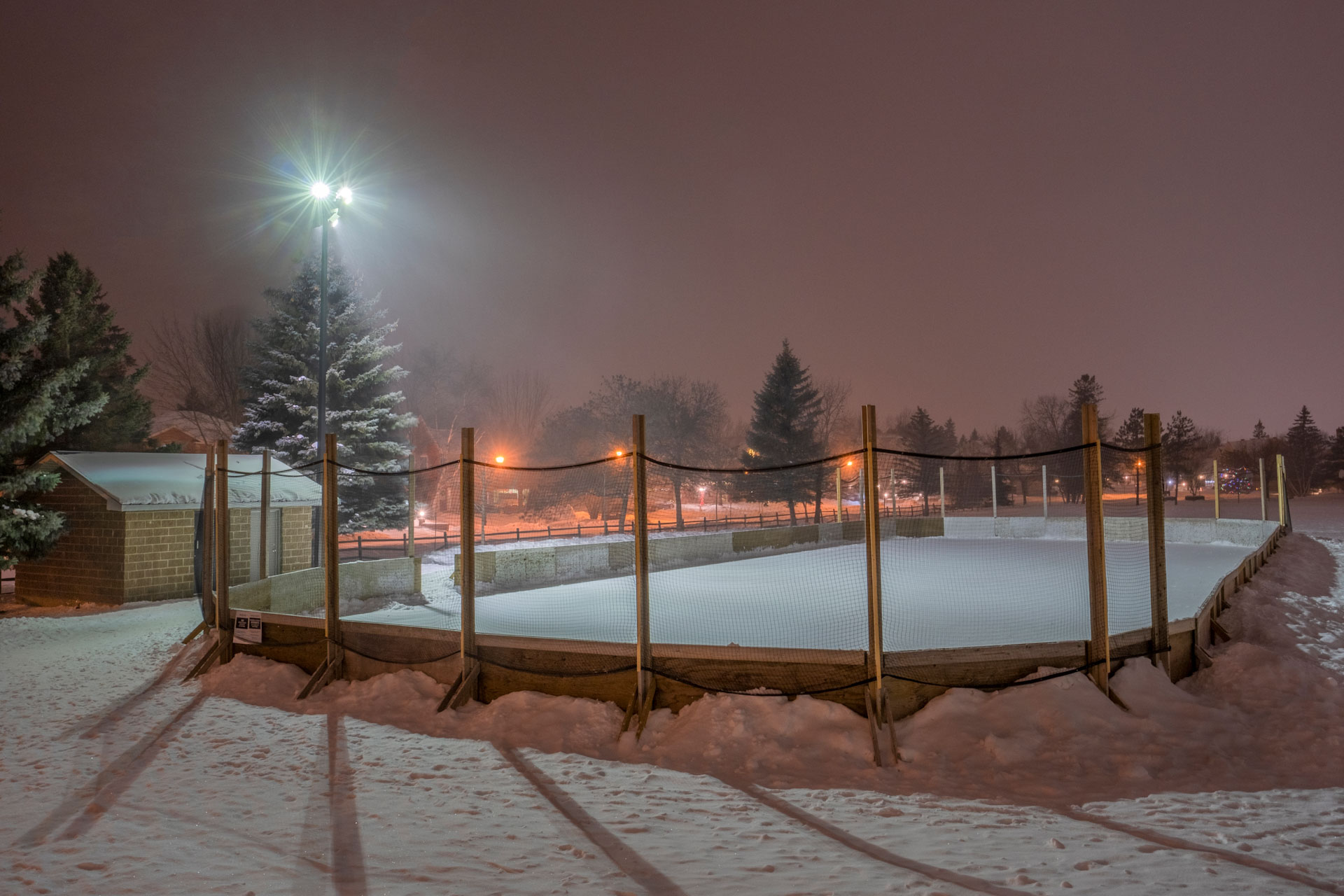 When asked if there was a favourite rink, the response ties into the rinks being a central part of the communities in Ottawa.

“It was Eastvale Rink, which is in North Beacon Hill on the east side of Ottawa. It was so interesting because I went there in the fall as part of my surveying all the rinks I wanted to photograph, and I looked at Eastvale and the rink boards were kind of beaten up, and there were no hills. For rinks, you need to be up high to photograph, and I ended up carrying a stepladder with me everywhere. Aside from this, I thought this would be hard to take photos, but I put it on my list, and I went back in the wintertime. And, Eastvale Rink turned out to be one of my favourite rinks. Because it looks so used and so well skated in, really, and used year-round, it turned out to be a really interesting photograph. Some of the rinks are beautiful and pristine, but Eastvale looks really well used.”

Nearby Henry Munro Middle School also uses the Eastvale Rink for gym class. Many of the children are new to Canada and use the time for skating class. Margo was invited by the teachers she met one night while photographing the rink to return for a class. The students started the season using folding chairs for balance and were confidently skating across the ice by the end. Our outdoor rinks have an enormous impact as part of the community, and for Eastvale Rink, it is not just for recreation but also for education.

Margo also had the opportunity to photograph the Chelsea Pond, scattering photos of the natural ice rink throughout the book.

“That’s a pond that is in a forest north of Ottawa in Chelsea, and the work that those volunteers put in – you think what is going on in the city this is even harder, it’s a natural pond that floods on its own, you have no control over that. Ponds move up and down, the water levels change all the time. And those volunteers are quite dedicated to that pond in their neighbourhood and it’s quite beautiful which is why I took so many photos of it.”

Next up for Margo might be a cross-Canada outdoor rink book. This ambitious project would include a city or community in each province and territory to do a project on their outdoor rinks and put it all together in a book. This would be a special piece for all Canadians to enjoy.

With the outdoor rink season shortening as a result of climate change, our winter lengths are varying across the country. Margo remarked that anyone involved in the rinks has noticed the rinks are freezing later and melting earlier.

“This icon of Canadian winter that we all know about and use and love in one way or another really is very fragile and that’s the thing that I kept in mind that was in my mind as I took these photos.”

Follow Margo McDiarmid on Instagram (@mcdiarmm) or visit her website at www.margomcdiarmid.com. If you’d like to purchase your own copy of Margo’s Outdoor Rink book or get in touch, you can reach her by e-mail at mcdiarmm@gmail.com.