It is with great honour that we welcome Clinton Samuel "Sammie" Wishlow into the CARHA Hockey Hall of Fame. Sammie was nominated by the Vancouver Ol' Blues Hockey Society (read the heartwarming nomination below) in the Builder Category. Inductees are recognized for the work and dedication required to build the association from infancy to the strong national organization it is today. These strong promoters and leaders of our hockey programs are easily identified, and their stories of commitment are quickly attested to.

CARHA Hockey Executive Director Lori Lopez presented Sammie with the award and a custom print during a visit to Richmond, British Columbia. Members of his hockey family joined Sammie to celebrate the occasion.

Congratulations, Sammie! We thank you for the many years you have dedicated to the sport, your community, and the association. It is a pleasure to present you with this prestigious award. 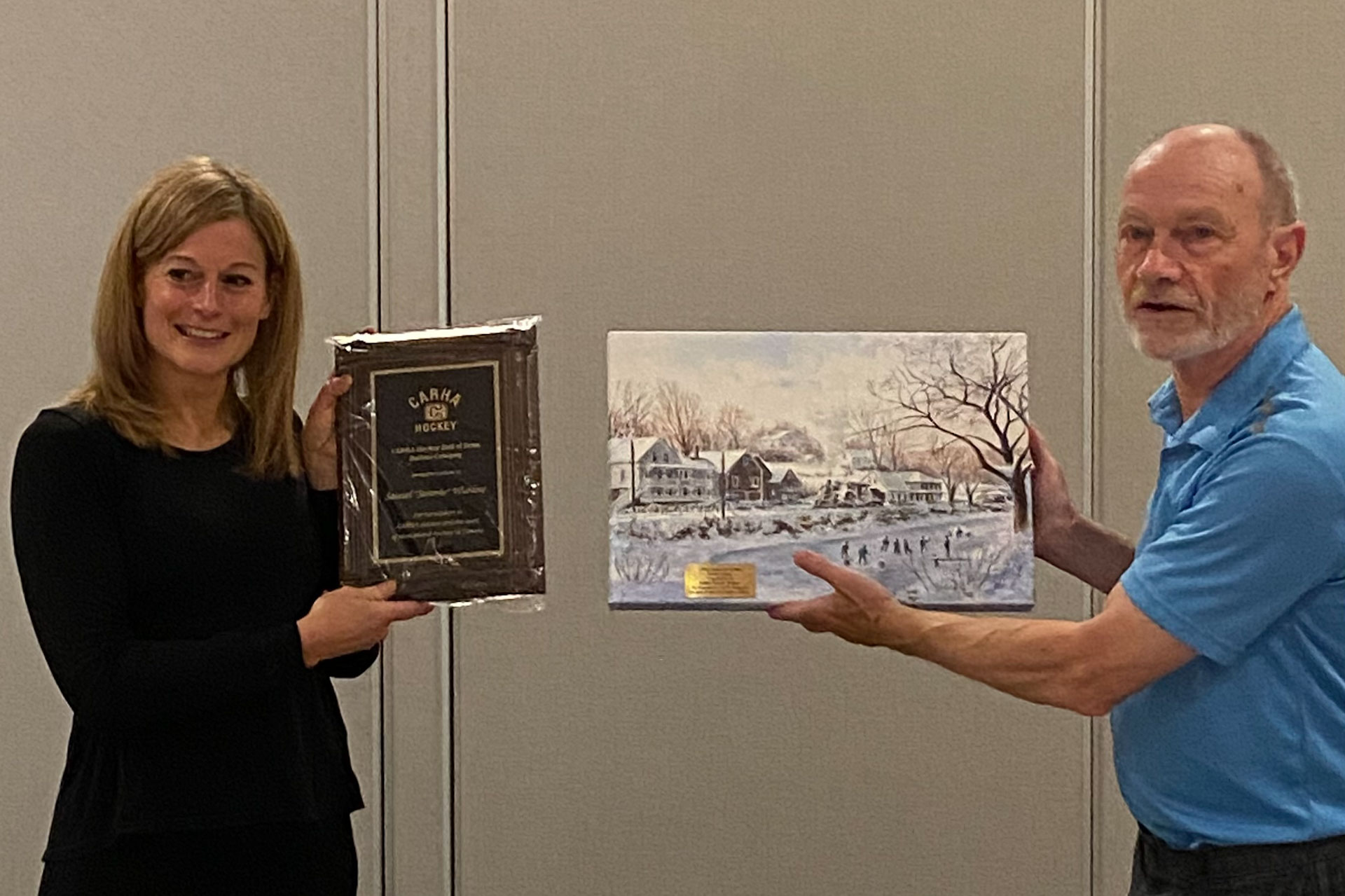 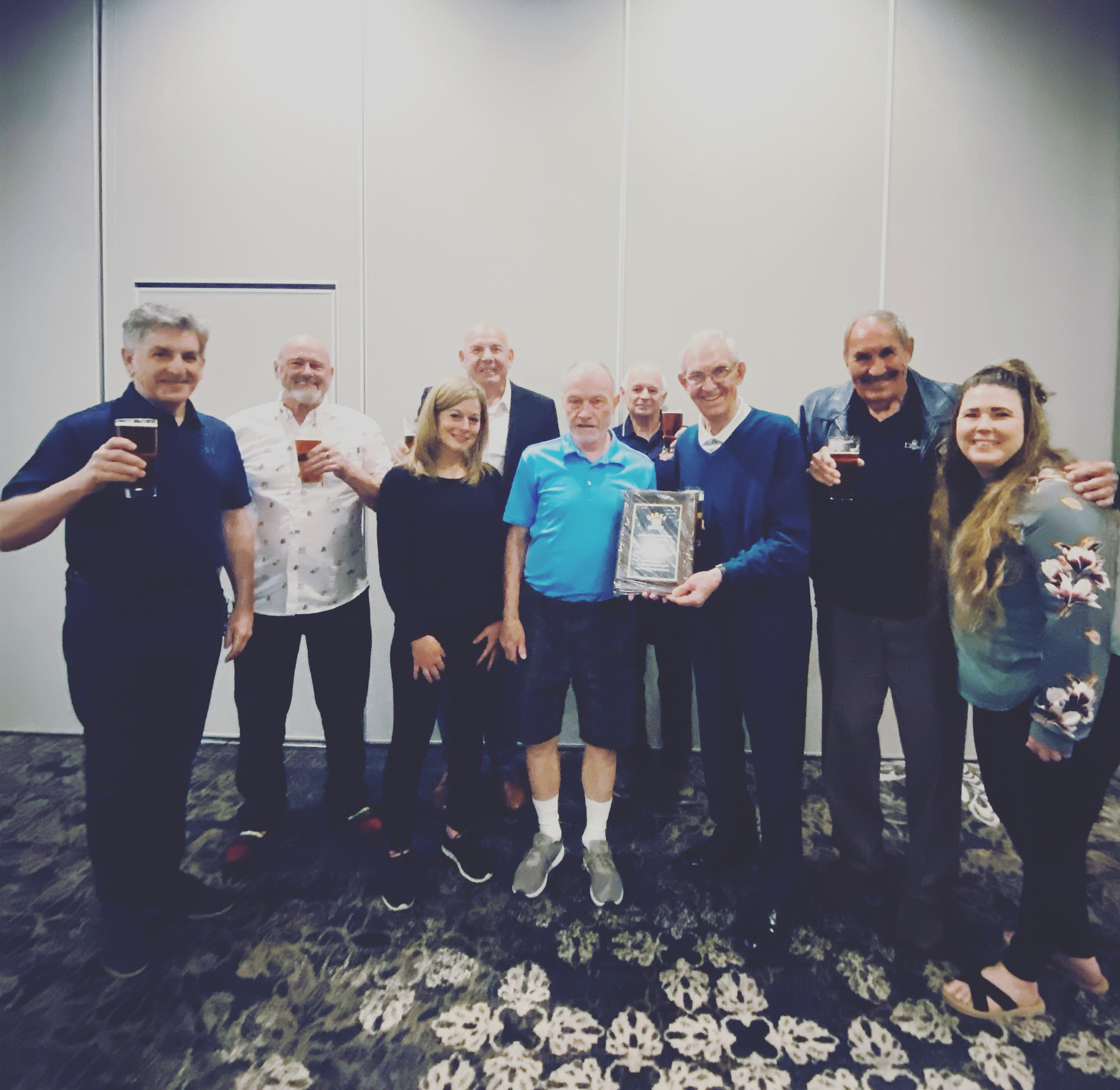 The Vancouver Ol' Blues Hockey Society, Executive and players are pleased to nominate Sammie Wishlow for selection to the CARHA Hockey Hall of Fame in the Builder Category.

Sammie has been a player, coach, and a builder of hockey as a member of both the Vancouver Ol' Blues and the Vancouver Schooners since 1985, almost four decades.

Sammie's family immigrated to Canada and settled in Saskatchewan. Sammie grew up in Canora, Saskatchewan with his brother and three sisters. At a very young age Sammie saw hockey being played on the ponds but like most immigrant families of the day on the prairies there was no money for skates and hockey equipment. In 1957, when Sammie was 8 years of age, Sammie and his family relocated from Saskatchewan to the Mount Pleasant area of Vancouver.

Sammie played self taught hockey in his teens. He loved watching the Vancouver Canucks of the Western Hockey League at the old forum. Sammie still laughs at the $1.00 admission fee to watch the game. However, he recalls that fee was only collected if you couldn't find a way to sneak into the rink or find an usher who would voluntarily turn a blind eye to allow the kids complimentary entrance to the game. Sammie took a shine to one position and he became a goalie.....

Sammie and others played hockey in the winter months in Vancouver but that wasn't enough hockey for Sammie. The only facility in those days that had ice in the summer in Vancouver was the University of British Columbia (UBC). In 1969 Sammie organized enough players to play summertime beer league hockey once a week at UBC. This was likely one of the first adult recreational summertime participation hockey in Vancouver. Sammie's love for building, organizing and playing of summertime hockey in the Lower Mainland of British Columbia continues today.........

Sammie finished high school at Sir Charles Tupper High School and sought employment with the Federal Government. In 1970 Sammie was hired by the Canadian Postal Service in Vancouver as an inside postal worker. Sammie's wage earning career ended in 2005 after 35 years of distinguished service to the postal service of Canada. His work to building CARHA hockey not only continued after retirement but in fact it significantly increased.

Sammie's dedication and professionalism to the game caught the eye of the Ol' Blues Captain, the late Alex Andrasik (CARHA Hall of Fame). In 1985 Sammie was recruited over a few cool ones to play goal for the Vancouver Ol' Blues. Alex Andrasik had great admiration for Sammie both on and off the ice and always said, "The more people there were in adult recreational hockey like Sammie, the better recreational hockey would be". In those early years, Sammie observed and adopted the coaching and team-building management techniques that would serve him well in his continuous quest as a coach and builder of CARHA-sanctioned recreational hockey in British Columbia.

The Vancouver Ol' Blues have had more than their share of good times and successes travelling to such places as Kelowna, Kamloops, Vernon, San Diego, Santa Rosa, Edmonton, Calgary, Sechelt, and Victoria competing at the highest levels of COHA/CARHA Hockey. Sammie fondly remembers two specific hockey trips in the 80s and 90s.

The Trip of a Life Time........
Sammie remembers the hockey trip of a life time in 1988 while playing for the Ol' Blues he was asked by the UBC "Old Birds" hockey team to travel to Finland, Czechoslovakia, and Russia to play exhibition games. Sammie vividly remembers standing in the train station in  Leningrad listening to people speaking his native Russian and thinking this is surreal that hockey has given me this opportunity to return directly to my family heritage. The hockey was great but it is the heritage memory he will always cherish.

The smell of a Life Time........
Sammie also recalls one of the more memorable trips in the early 90s. Sammie, being the consummate team builder, generously volunteered to take all the team hockey equipment in his van to the hockey tournament in Santa Rosa, California. It was midsummer, 85 degrees, no van air conditioning, and 12 hockey bags jammed into the van driving down the Interstate 5 with the windows open to relieve the smell. The van broke down in northern California and Sammie and his travelling partner the late Jim Steenson slept in the van overnight to ensure the hockey bags would not be stolen. The next day they rented a car, jammed the 12 hockey bags into the car and continued the drive to Santa Rosa to arrive just in time for the games. If that is not taking one for the team, I don't know what is?
The kicker was that after 3 "sweaty" hockey games he drove the 12 hockey bags back to Vancouver.............

In 1989 a significant number of the original players of the Vancouver Ol' Blues were getting older and again with the support of Labatt Brewing Company, those players decided to expand from the Ol' Blues to form an over 50 years of age team. Labatt Brewing Company had just launched a new lager beer to the public and it was named the "Schooner". Hockey and beer always seems to be spoken in the same breath thus it was logical and appropriate to call the new team, The "Schooners". The Schooners were one of the original over SO age category teams and had exceptional success and enjoyment over the years in numerous CARHA-sponsored hockey tournaments throughout North America.

In 1999, again over a couple of cool ones, Sammie moved from the Vancouver OI' Blues and became the goalie of the Schooners. The Schooners joined the Greater Vancouver Oldtimer Hockey Association (GVOHA) and were one of the originals in the over 60 age league.

In addition to the Wednesday winter league commitment the Schooners continued to manage and build recreational hockey that was played every Monday and Thursday during the entire year. This hockey has evolved and is still alive and well in Vancouver today. This hockey consists of a large number of players, different teams, some of younger ages but the majority are over 50 years of age. It is essential that players are CARHA affiliated to play in the hockey that is presently widely known as "Sammie's hockey".

This hockey epitomizes physical exercise, team building and sportsmanship. The names and number of players has continuously fluctuated over the years and Sammie estimates 150 to 200 players have played and/or continue to play in Sammie's hockey. Sammie meticulously picks the teams to achieve parity, assigns positions, identifies sweater color, and posts the teams in the dressing rooms twice a week almost every week of the year. Sammie's hockey is particularly beneficial to building more hockey players while prioritizing physical fitness and sportsmanship like play. The player you played against in the Wednesday over 60 age league may be your wingman or defense partner in the Monday or Thursday hockey.

In 2006, Sammie continued the building of hockey in the coaching, organizing and management of the Schooners in the winter over 60 GVOHA league play as well as managing the Monday and Thursday winter and summer hockey. Sammie can still be seen to this day going around the dressing room after a game performing his learned "traditional" iconic technique of gingerly pointing a finger at each individual in the dressing room to try and establish how many players will be out for the next on-ice game. Sammie asks the same simple question, "are you available for _____________"

Sammie does not use a notebook to record the "ya and nays" yet amazingly remembers exactly who is going to be available and who is not available for the future games. This is a continuous, long term time consuming task.

Hockey is a way of life and life commitment for Sammie and he spends at least 4 entire days a week during the year committed to promoting, developing and managing CARHA-based recreational hockey. Sammie has put in countless hours over many years building hockey, in phoning teams, players, league officials, rink officials, referees and CARHA etc.... not to mention the meticulous care of team sweaters and equipment.

When asked why he continues to stay involved in developing and building recreational hockey, Sammie talked of the strong camaraderie, friendship and support within the team and amongst all teams - saying there are "very few hockey teams at any age that don't display or live up to the expectations, professionalism and sportsmanship expected of CARHA Hockey".

I have made enquiries and received support from a number of individuals in CARHA-affiliated teams such as: Vancouver Flyers, Vintage Vets, The Fossils, and of course the Schooners and Vancouver Ol' Blues, as well as support from former players of CARHA teams, Orient Express, Burnaby Lakers, Coquitlam Ambassadors, and Ladner Bruins. I have also contacted Hall of Fame inductees,  Howie Larke and Gordie Lindal and the message is the same .... Sammie is a genuine humble man that has been a real builder of hockey for many years in the Province of British Columbia. His dedication, inspiration, and sportsmanship have not only been significant to the present development of CARHA Hockey but will continue to benefit hockey for younger and older future generations. Sammie lives the game of hockey and is a good person in all aspects of his personal life. Sammie Wishlow's induction into the prestigious CARHA Hall of Fame would be both a credit to the individual, the sport of hockey and to the Hockey Hall of Fame itself.