Growing up in Ottawa, Tyler Fitch has been involved in hockey most of his life. He played for his dad, a junior hockey coach, through peewee, then took a strong interest in the business side. When his dad started coaching minor midget AAA in their OHL draft year, Tyler stopped playing competitively to follow his dad’s team and connect with people who worked in hockey.

A graduate of Laurentian University for Sports Administration, Tyler immersed himself in the sports business world, doing internships with the Ottawa Senators and Ottawa Red Blacks. As his studies were coming to an end, he interviewed for a position with the Edmonton Oilers. The job offer came through as he completed his final exam and Tyler made the move to Edmonton, where he’s been with the Oilers since 2016. He’s worked in various capacities for the organization and currently is Manager, Season Seat Services. He’d started with Edmonton in Season Seat Services and now manages the staff of five who take care of the season ticket holder base. Tyler is also an alumnus of the Business of Hockey Institute, a program founded by Brian Burke and Ritch Winter to assist with professional development for business employees in hockey organizations.

In a typical hockey season, Tyler referees five or six nights a week for a rec hockey league and plays pickup hockey.

It was a pleasure to chat with Tyler about his hockey journey and experiences, inclusion in sport, and staying true to himself.

Answers edited for length and clarity

What does Pride mean to you?

The way I can best say it is celebrating who you are without having to worry or second guess what that means. To me, it’s celebrating the diversity in our world. In hockey specifically, trying to continue to promote that inclusive environment we’re always striving for.

How has your experience been playing hockey or sports in general?

It’s definitely different. As a kid, I didn’t know anyone who was gay. I didn’t have that exposure, which meant as a teenager I had a pretty difficult time coming to the reality that I was gay. It sounds so crazy to say in hindsight, but there was even a time that I thought that I couldn’t be gay because I liked sports so much and not so much fashion. I think the fact that that was legitimately a thought in my mind at one point shows why this topic of pride is so important and inclusion and diversity because that was legitimately a thought in my head. Playing in hockey, growing up on those teams, you don’t blame anyone. It just wasn’t a talking point; it’s not something that ever came up. I probably had the same experience as anyone around my age where people are saying homophobic slurs as a part of everyday vocabulary, and it’s just out of habit. It was not talked about, it was just normal. It was difficult for sure. But I don’t want to make it too dramatic at the same time.

When I was playing competitive hockey, I hadn’t come out yet, so I was just for most of that time struggling to connect my own dots on who I was.

Did you feel supported when you came out?

Yes, I’m really lucky to be able to answer that with a resounding yes. My mom, dad, sister, my stepfamily, they were unbelievably supportive. The one group that gets a special shout out would be my friend group in university. I came out during my second year, and this was the group I was nervous to come out to because I was in sports administration, lots of athletes, and again that same culture of that’s not something we talked about. I was so unconditionally accepted by my friend group, and it’s not lost on me how lucky I was for that to be the case. I was legitimately scared at how they would react, and I was scared that I would be treated differently, but that wasn’t the case. From the hockey culture, I still want to get chirped and get made fun of and just be treated just the same.

You’re heavily involved in the hockey community, what progress have you seen made?

Last year I got to ref the Calgary Pioneers, I think they were the first LGBTQ+ hockey team, and a team in Edmonton eventually formed, the Edmonton Rage. Last year they actually played an exhibition hockey game on the ice at the West Edmonton Mall and I got to referee that game. The fact that two LGBTQ+ hockey teams can play an exhibition game to me was just awesome to celebrate the 40 or so players on the ice probably having similar stories to each other. That’s what made me so happy. Some people might say why is that so important. I even asked that at some points in my life, why does a team need to be specifically LGBTQ+, and I think it was just awesome to see that. At times people who were identified as LGBTQ+ felt very isolated and alone, and to be able to field two teams that all share similar backgrounds and experiences was really cool to be a part of. It was such a rewarding experience. To know that a place like that or a team like that would have existed at the age where I was coming to grips with everything would have been a game-changer.

What can we do to make hockey culture more inclusive to the LGBTQ+ community?

I think the biggest thing is to continue to normalize these conversations in dressing rooms. It’s a slow start but I think those are the important building blocks and foundation towards making this a completely inclusive environment. Just because we’re a hockey team or a sports team doesn’t mean we can’t focus on inclusion. I think whether it’s a league or a team, whether it’s coaches or whoever it is taking the responsibility to make these conversations normal is helpful because that avoids the situation I had to go through where you’re thinking someone’s sexuality or identity is clashing with their image of liking hockey.

Are you seeing the different teams or leagues you’re involved in stepping up?

For sure. With the example of the Edmonton Rage team, I’ve officiated their games before and worked with them before and I think because they’ve had an overwhelmingly positive experience is amazing and I know the league that they play in backs them up on that and would have no tolerance if there was anything to happen to them because of being an LGBTQ+ team. I think that’s another critical component for a league to do is to set the boundaries and the expectation and work towards actually upholding that commitment to being inclusive.

You and your partner recently got married in Denmark (congrats!), can you tell us a little about your story?

Thank you! The story will age very well. My partner is German and was stuck, which is dramatic but, in many ways, true, was stuck in Germany because of COVID. We had met in Canada and he was on working visas and had run out of them. So our plan was he’d return to Germany for a bit, and we’d slowly work on applying for permanent residency while he was in Germany. But then COVID hit and so we were apart. Eventually, it became easier for me to go to him than him to come to me, so last September I went to Germany. Things were pretty open at the time in Europe, and we locked in with Denmark on how to get married. It ended up the border closed between Denmark and Germany the week after we got married. As time goes on the story will seem more and more crazy.

Now we have to figure out how we can coordinate that celebration with our family. 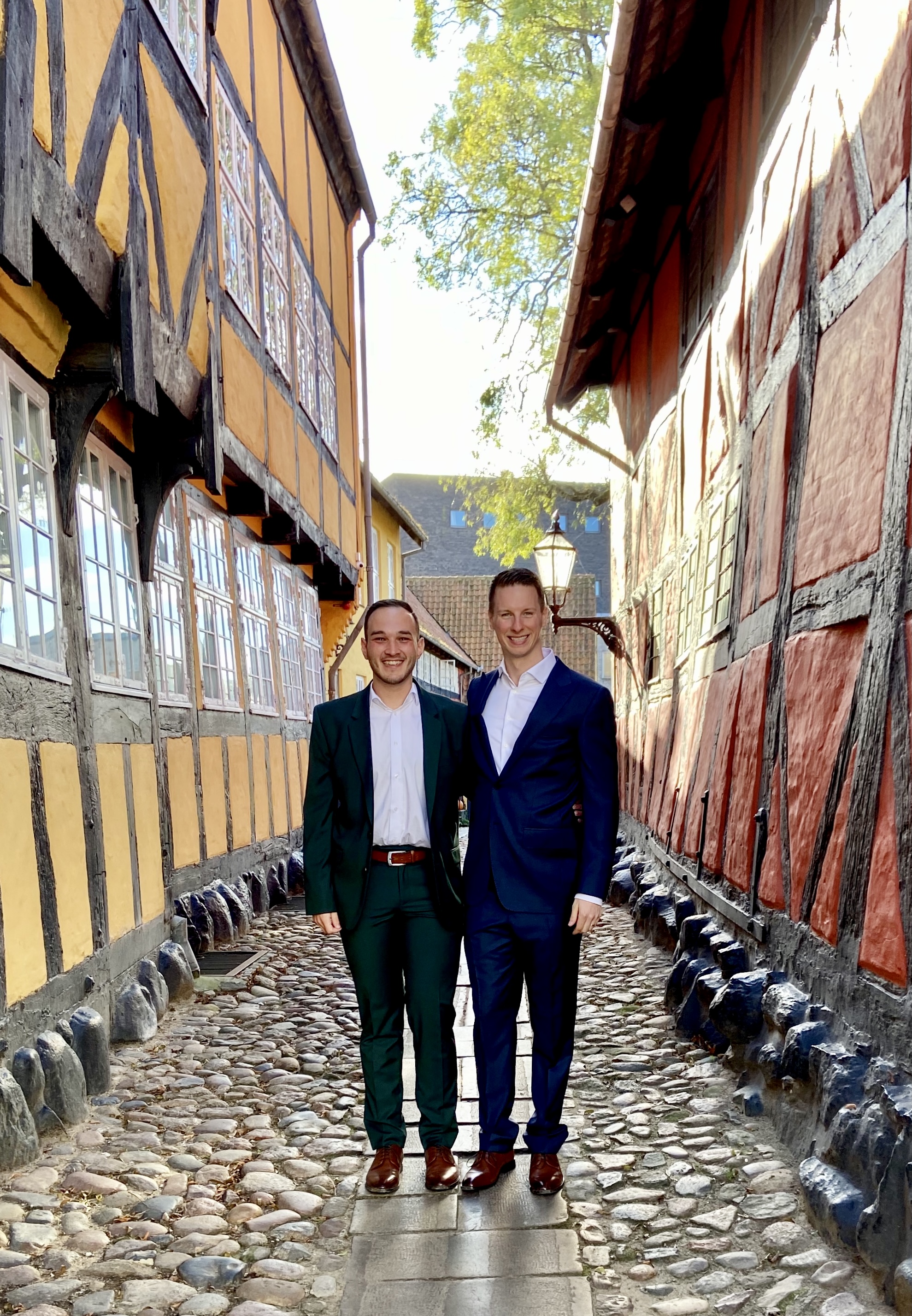 So, does your partner play hockey?

No, but it’s going to happen one day! I’m confident. He actually has really embraced the sport. Didn’t know anything about it when we first met, and now, in some ways, he is almost more of a fan than I am in the sense that he wants to watch every game. Hopefully, I can get him into timekeeping. That’s my next goal, get him in the arena and then get him on the ice eventually. He skates really well, just needs to work on the stick handling.

The biggest advice I have, I guess I would direct it at someone whether they’re a player or on the business side. But whether it’s their sexuality or their identity or whatever is what’s affecting them, is just to continue to be really firm in who you are and embrace who you are and don’t let that overshadow what you want to be or what you want to do. It sounds so cliché in many ways, but there’s a reason it’s said because I feel like I’m at a great point where I can really embrace who I am and be who I want to be and not have to worry about that.

You still see people who are skeptical or wanting to hide, and I get it, I understand it, it’s tough. But that difficult moment when I was nineteen years old to decide to come out, and it sounds like such a challenging thing to do, but by being true to myself it’s allowed me to really flourish in the years since and be really open with the world and who I am.