How long have you been involved in hockey?

I played hockey up until Peewee in my youth (12 years old), stopped playing over Jr. High and High School, joined university intramural hockey when I was going to the University of Calgary, stopped playing again for about a decade, and then started up the South Calgary Recreational Hockey League (SCRHL) in 2006, so that I could play games closer to home (rather than drive all over Calgary to play). I’ve been playing since 2006 (excluding the 2020/21 COVID stoppages due to government regulations).

What would you tell anyone interested in playing adult recreational hockey?

You can start playing recreational hockey at any time if you are passionate about it; The passion will drive you to learn to skate and play the game.

Tell us about your role as the owner/league manager of the South Calgary Recreational Hockey
League (SCRHL)?

I started the league in 2006 for generally selfish reasons: I was sick of driving from the South end of Calgary to far Northwest and Northeast Calgary to play late games. My son was born a few years earlier, I was hired at a new job, and I wanted my recreation to be closer to home. So, I rented some street signs to advertise interest in morning hockey in 2006 (this was just before Facebook and social media). I had enough interest to form three teams to play early morning hockey at an arena about a 5-minute drive from my house. The SCRHL is now on track to have 34 morning and evening teams for the Fall 2021 and Winter 2022 Season (highest it’s ever been) with games entirely in Southwest and Southeast Calgary for like-minded players who want to play close to home (It’s a bit of a niche league, in that sense). 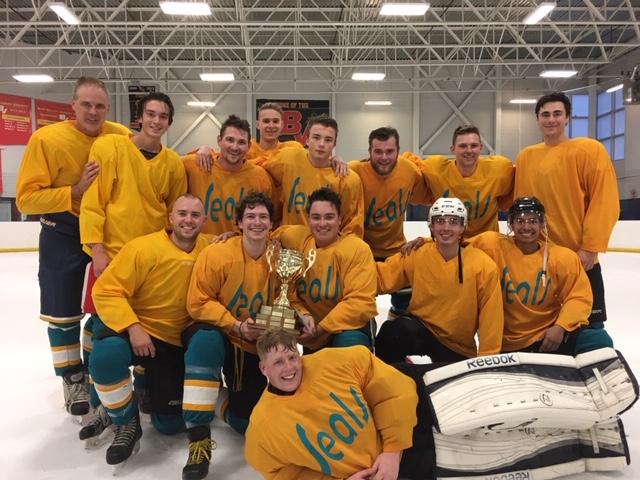 The mission statement below is right from the SCRHL website’s “ABOUT US” section:

Since September 2006, the South Calgary Recreational Hockey League (SCRHL) has provided weekly ice time schedules, qualified referees and timekeepers, a safe playing environment, and Canadian Adult Recreational Hockey Association (CARHA) liability coverage to players aged 18+ who are interested in playing weekly morning and evening adult recreational hockey in S.E. and S.W. Calgary from Monday to Saturday. Most of the individuals who play in this league are in their early-30's to late-40's, however, all of the players' ages cover a broad range from 18 to 55. Also, the experience level of the players is rather diverse -- from novice to somewhat experienced. So, overall, it's definitely more of a senior league, but the calibre of play is still fun and competitive with an emphasis on good sportsmanship. Basically, the aim of this league is get some exercise, enjoy a game of non-checking hockey without slapshots, make some friends, and have fun in the process before you go to work in the weekday morning or to the pub with your team in the evening.

What has made you stick with the sport of hockey as opposed to another sport?

My passion for hockey, my desire to use the league as a vehicle to give back to the community (ie: KidSport, helping local Calgary businesses / non-profit organizations, etc), and to maintain the friends whom I’ve made since I started the league 15 years ago are the nuggets that keep me sticking to the sport.