Jamie Leppard was nominated by his fellow volunteer team, the Weybridge ODR Crew (aka the 'Hosers') for CARHA Hockey's outdoor rink contest. We are so thankful for volunteers, like Jamie, who keep the rinks active for all to enjoy! His teammates shared the following about Jamie's awesome leadership.

Since taking over leadership of our ODR 4 years ago, Jamie Leppard has not only transformed our rink but also the community around it.

Jamie has lived in the Weybridge area his entire life – a small neighbourhood in the suburb of Nepean (sometimes called Old Barrhaven), located in the west-end of Ottawa. He grew up playing on the same playgrounds, ball diamonds, soccer pitches and ODR that his kids now use. He also spent a large portion of his youth hanging around the rinks of the Nepean Minor Hockey Association, playing hockey all the way through to the junior level. He currently has 2 kids in the same program (Emit, IP Program; Cooper, Competitive U-11) while his daughter, Grace, is part of the U-13 local girls league, the Nepean Wildcats. In the summer, Jamie helps coach baseball with the champion-winning Nepean Eagles program.

Supporting local sports programs for youth is very important to Jamie and his wife, Shauna. They have dedicated a big portion of their lives to ensuring these programs remain fun and successful – not just for their kids, but for everyone lucky enough to call Nepean home.

Jamie started volunteering at the Weybridge ODR around 7 years ago. At that time, he was just a part of the team. He took over leadership 4 years ago. In the time since he became Team Captain, Weybridge has become one of the most popular ODR rinks across the entire city of Ottawa.

Jamie’s biggest improvement to Weybridge ODR was building a solid rink crew. This is something most ODRs lack, and Weybridge ODR was no exception. Prior to Jamie’s leadership, the rink was run by a skeleton crew of just a few dads. The rink was rarely scraped, there was always snow on the sides of the boards and the ice was “just okay”.

Jamie didn’t build his team through a public campaign or piling guilt-trips on the parents of kids using the ODR. He did it slowly, identifying reliable individuals and then building strong relationships with them.

First and foremost, Jamie leads by example. He is the hardest working member of the Crew - first to the rink and the last to leave. He routinely volunteers over 200 hours a year to the ODR, which is an amazing number by itself without any consideration of the fact he has 3 kids in hockey and works full-time. He asks for absolutely nothing in return – no recognition or accolades. In fact, to a fault, he ALWAYS credits the overwhelming success of Weybridge ODR to the team he captains.

Jamie’s single motivation is community pride. He wants to give kids and neighbours a chance to enjoy the sport of hockey and skating right here in our very own community. He is competitive, in a friendly way, with the city’s other ODRs, especially the local ones in Barrhaven. His goals are simple – he wants to have excellent ice, be the first rink open and the last one closed each year.

From a leadership standpoint, Jamie is the most uncomplicated leader I have ever encountered. He delegates (fully) to anyone he considers reliable (remember, he doesn’t want to risk things not getting done or getting done well – community pride is involved here ). Once he hands something off to you, he never nags or follows-up. He trusts his team, which is super empowering as a volunteer. It is also one of the reasons why the Crew has gotten so strong over the last few years.

My dad was the fire chief of a volunteer fire brigade when I was a child. I remember visiting the fire hall and seeing the pride all the volunteers had in being part of that team. I sense the same pride and camaraderie in the men who make up the Weybridge ODR Crew. It feels old school, but in the best kind of the sense.

Jamie has successfully used incrementalism to manage the ODR and the Crew. He is very aware of the capacity limitations of his team and is careful not to add too much to each year’s program – which is very much in keeping with his uncomplicated leadership approach. Since taking over leadership of the Weybridge ODR, Jamie has introduced the following, among many other things:

Committee members, if you are looking for someone who has made an impact in their community through ODR leadership, you won’t find anyone more worthy of such a prize than Jamie Leppard.

Below are some pictures from the past year along with some amazing stories of the 2021/22 Weybridge ODR season – our very best one yet.

OPENING DAY – Our season started on Dec 19 – one of our earliest starts ever. We also had our biggest turn-out of first day volunteers which helped us get the ice ready for skating in under 24 hours. This included the introduction of the “Puddle Pond” for skaters – one of Jamie’s top priorities this year. The Pond would make things safer for skaters and hockey players, while providing a less intimidating environment for first-time and beginning skaters.

THE PUDDLE POND – One of the season’s greatest accomplishments was the introduction of the Puddle Pond. As the popularity of Weybridge ODR has risen, we have experienced over-crowding on the main rink, especially for those not-playing hockey. We also heard feedback that the main rink was intimidating for those just learning how to skate or those who don’t know how to skate that well. Jamie came up with the idea of creating a small rink on the soccer pitch right next to the main rink. This rink became so popular with the community that we doubled its size and installed flood lighting for nighttime skates. 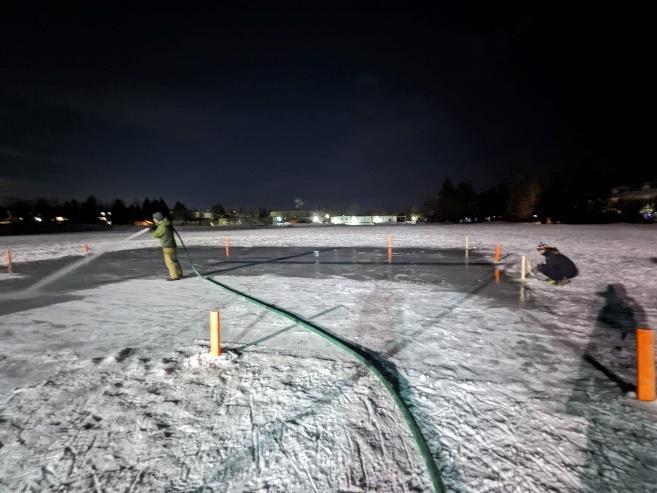 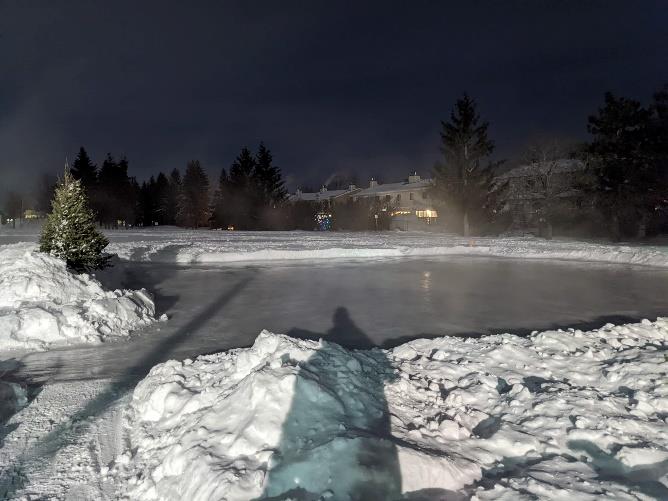 SOCIAL MEDIA PRESENCE – During the Christmas Lockdown, Jamie came up with the idea of making the rink available for private bookings, like birthday parties. He announced this on our Twitter account and within a few days we were overwhelmed with birthday party bookings and a lot of attention from local media. Multiple interviews were conducted with CBC Radio and CTV Ottawa while several others were politely declined due to the number of bookings that were adding up. Not being much a public spokesman, Jamie delegated this task to his trusted Deputy Captain of many years, Mike Hollingworth. The pictures below show a live interview by CTV Ottawa.

WEYBRIDGE ODR SWAG – One of the ways Jamie has been able to build loyalty and camaraderie among the ODR Crew is through branded swag. Despite being the biggest volunteer on the team, Jamie is a strong believer is recognizing the contribution of each Crew member. He personally designs them and then delivers the items to each volunteer’s doorstep, often with his two boys. The picture below captures swag from the last three years.

ODR BRANDED RINK ACCESSORIES – Since the start of Covid, Jamie has encouraged the development of some rink accessories such as benches to help make changing and tying skates outside a little more comfortable (i.e., our shack has been effectively closed for 2 years). During this time, we have built two benches with coat racks in the colors of our local hockey association, including decals. We have also built boxes for storing shoes and bags along with a rink closure bar, a shovel/stick rack and a water bottle shelf alongside the rink. 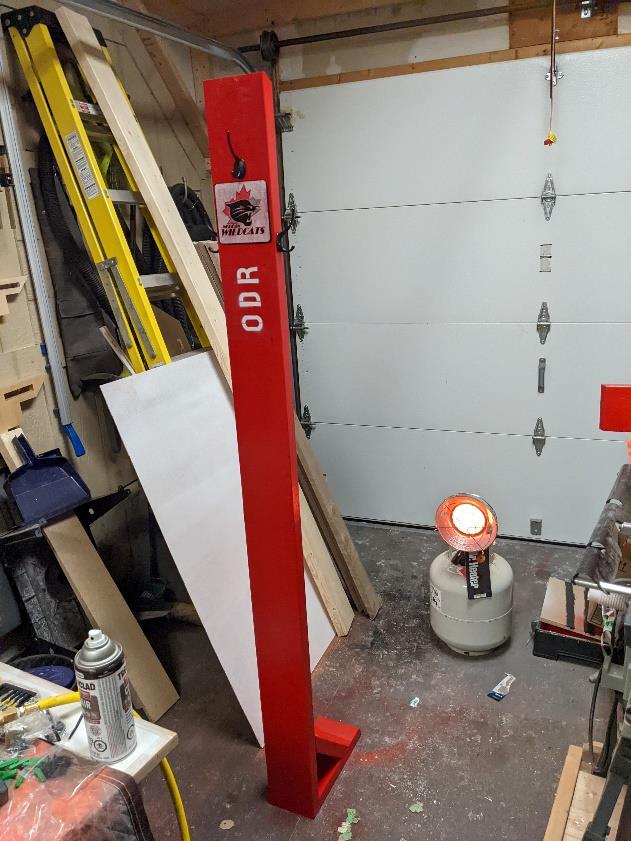 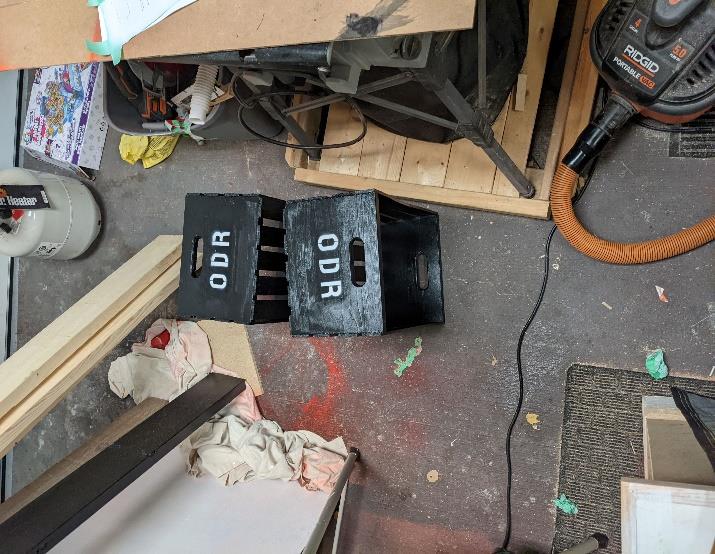 STAFF APPRECIATION NIGHT – One of the highlights of each ODR season is the Staff Appreciation Night. Jamie fills a cooler full of beer, closes the rink early, and invites all the guys who made the rink a success out for a game of pick-up hockey. This is a picture of some of the guys who were able to make it out to our end-of-year celebration. It was cold, but a great time was had by all.

PRIVATE RINK BOOKING – As mentioned above, one of this year’s greatest successes was Jamie’s idea of private rink bookings. We hosted dozens of birthday parties, Church Youth Groups, hockey teams, school classes and even a fundraiser. In a year of loss and darkness, this little rink proved to be a great source of joy and fun. We were honored to host the Coalition to Cure CHD2 winter fundraiser. This amazing cause raises awareness of a rare form of epilepsy and funds to help find a cure. The event was organized by local neighbors with a son who has CHD2 and included raffles, free food and drinks, sliding, curling and of course, hockey.

THE MAN, THE MYTH, THE LEGEND – I took a lot of pictures of the rink this year, and while reviewing them I quickly realized one thing – Jamie is in very few of them. And that pretty much sums him up. He’s always busy doing all the selfless things that it takes to run a successful ODR – the hard, behind-the-scenes, things that don’t get the recognition they should. I did manage to capture one picture though that is quintessential Jamie – it’s, fittingly, an action shot of him blowing out the many feet of snow we had during the last month of operation. Jamie Leppard – a man of action.